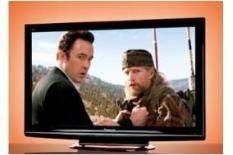 Plasma fans on a tight budget will love the TX-P46S10, but if you’re prepared to go LCD you can get a better performance for similar money

The Panasonic TX-P46S10 may do without some of the bells and whistles fitted to its TX-P46G15 sibling (£1080) – like 600Hz motion processing, DLNA and internet connections, a fourth HDMI and Freesat – but it is much cheaper, too.

So if you're not bothered with those particular features, you should buy competively-priced plasma right?

Well, yes and no. Although far more affordable than the TX-P46G15, it's a slightly weaker performer, making the choice between the two a tough one to make.

More importantly, though, for £50 more you can buy the LG 47LF7700, which is undoubtedly better.

Natural, subtle colours
That's not to say this Panasonic is bad, however. Play The Duchess on Blu-ray and although detail and bright tones are weaker than some rivals, the actual colour palette is natural and subtle, resulting in skin tones with realistic hues and gradients.

Black depth is very impressive for the money, too, and despite that relative lack of punch, insight into the dark scene at the theatre remains decent.

The 'S10 may not have the 'G15's 600Hz sub-field drive, but it does have a 400Hz version, which is actually only marginally weaker.

Unfortunately neither is particularly impressive, so although there's no unnaturalness to motion that some people are especially sensitive to, it's not very smooth or stable, either.

Stable pictures in standard-def
Panasonics tend to produce stable standard-definition pictures, and the TX-P46S10 is no exception. Asked to upscale the Twilight DVD, it responds with a clean, noise-free picture.

Again, overall punch isn't the strongest, but the colour palette is controlled and natural, realistically conveying both the paleness of the vampires and the more colourful clothes of the students.

The Freeview tuner fares similarly, so although some comparable TVs offer greater detail recovery and vibrancy, the stability and control of the image means it's eminently enjoyable.

Perhaps surprisingly, the TX-P46S10's audio is better than that from the TX-P46G15. In fact, it's more controlled than most TVs at this price even offering a degree of envelopment in the delivery.