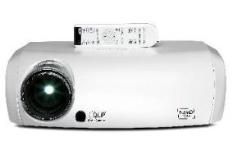 Entry-level, Full HD projectors are now available at a fraction of the price of many large-screen plasma TVs, and they can fire out images three times as big – making a unit such as the Optoma HD800X LV seem like a very sensible purchase.

The Optoma is a compact DLP design. That curved chassis gives it an interesting look.

On top of the projector, there's a bank of buttons that give you control over menus. At the back, there's an accessible selection of inputs including dual HDMIs, component video and a DVI socket.

Spec has few luxuries
The fact that it's an entry-level projector means that luxury features are few and far between.

You have to manually twist the lens to focus and slide the lever on the outer edge of the lens to zoom.

Vertical image shift is motorised and can be accessed through the remote, which is a glossy white affair with a striking yellow/green backlight.

To help with positioning, there are elevator feet at the front and screw-in feet at the rear, both of which require nimble fingers.

Detailed, colourful BD images
Send through Mamma Mia! on Blu-ray and you're presented with an image that's low on noise and big on detail. The Greek island backdrop looks great, aided by the projector's ability to produce bold, rich colours.

Switch to the more subdued setting of Gotham City in The Dark Knight and the HD800X LV has no problem serving up deep blacks. However, the class leaders at this price do uncover more detail and handle images with greater subtlety.

The Optoma also lacks a little composure when faced with fast movement or slow panning shots. The picture sometimes skips along as opposed to flowing smoothly.

Class-leading status is out of reach, but the HD800X LV is one of those budget projectors that definitely warrants an audition.