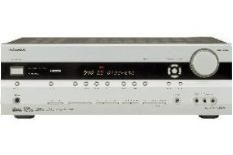 We’re still big fans of the TX-SR606, but new models from rival brands have seriously upped the ante

The Onkyo TX-SR606 was pipped to first place by Denon's AVR-1909 back in our September issue. Both were deemed worthy of five stars, but the Denon got the nod thanks to its extra level of refinement. But now the Denon has been dropped to four stars, what does this mean for the much-loved Onkyo?

Well, it's still difficult to fault the TX-SR606's design. True, the brutish exterior won't be to everyone's taste, but then this isn't a beauty pageant.

Besides, the Onkyo is fitted with enough connections (four HDMI inputs are extremely welcome) and features (video upconversion and 1080i upscaling are all present) to cater for all the kit you can throw in its general direction.

The on-screen menus are clear, too. You don't have to fight your way through layers of nonsense to reach the key functions or set things up.

Onkyo has built a reputation on bold, muscular-sounding receivers, and the TX-SR606 is no different. Feed it Iron Man on DVD and it isn't afraid of letting you know just how much bang you're getting for your bucks.

Delivers with real enthusiasm
Such is the Onkyo's power and drive that just when the action starts to die down, you're hit with another volley of explosive surround sound effects that blasts off any cobwebs that might have briefly appeared in your eardrums.

And don't think that this receiver is all bark and no bite: there's good clarity to dialogue, and it's easy to follow actor's voices, even when Batman Begins descends into sonic chaos.

The Onkyo's exciting nature is carried over to its stereo music playback, too. Spinning the OST to Hellboy II, the Onkyo drives along very nicely indeed. Plodding, sluggish delivery just isn't in this receiver's DNA.

However, we'd like a bit more refinement and composure in the treble. The Onkyo's top-end sounds brash when compared to the best here.

Now let's be clear: the TX-SR606 is still thrilling. It's just that the Yamaha DSP-AX763 is the more mature, accomplished all-round listen