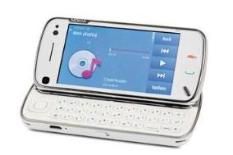 Long gone are the days when mobiles looked like swimming bricks and lasted five minutes before needing a full recharge. The Nokia N97 (free on contract) packs in music, video, web browsing, FM radio, a video camera and more, and represents the company's latest attack on Apple's iPhone.

It's chunkier and uglier than its Apple rival, but its slide-out QWERTY keyboard makes text entry a doddle. The touch-screen is fairly responsive, but there's no Apple-esque multi-touch and zooming in/out.

A 32GB HDD can be boosted via the microSD card slot, while the 40-hour battery life for music playback is impressive.

Ovi Store needs improvements
You can source your own content, make it using the 5MP camera, or try to use the Ovi Store, but we found it lacked the quality and quantity of Apple's iTunes.

Music sounds punchy, with plenty of attack, despite giving away a smidge of insight. Video isn't so strong, with streamed YouTube content lacking detail. The lack of iPlayer integration at launch is a shame, too.

Browsing the web is fluid, though again it's patchier in terms of rendering websites compared to the you-know-what (but better than the X Series Walkman).

With Nokia Maps, a built-in compass, AGPS and more, there's plenty else to play with.

We can understand why some people wish to be free from Apple's and O2's contract, and the N97 holds plenty of appeal.

See all our multimedia phone reviews