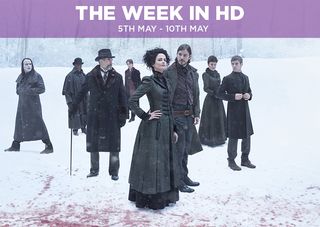 The Oscar-winning Birdman: Or (The Unexpected Virtue of Ignorance) makes its way to Blu-ray and we doubt you'll watch a stranger film than this for the rest of the year. It's a film that will divide opinion and may require further viewings (or perhaps just one) to get the most out of it.

Our review firmly landed on the side of enjoying Michael Keaton's stumbles as he attempts to escape his super-hero past by staging a play on Broadway.

There are strong performances by Emma Stone, Edward Norton and Naomi Watts, but the real star of the show is cinematographer Emmanuel Lubezki, who shoots the film as if it was one single take. Have fun spotting the edits...

Buy Birdman on Blu-ray at Amazon

Antonio Banderas plays an insurance agent in Automata, but not the kind of of agent you may be expecting. He's an agent for a robotics corporation that's investigating whether robots are defying their protocols.

In a world where 99.7 per cent of humanity has been wiped out by global storms, what he discovers could have repercussions for what's left of humanity.

Buy Automata on Blu-ray at Amazon

Angelina Jolie directs Jack O'Connell in Unbroken, a film about Louis Zamperini's life. It's a story that's hard to do justice in a two-hour film - Zamperini competed at the Olympics, was stranded in the Pacific for 47 days after his plane crashed, spent time in the Japanese POW camp, and managed to find time to punch a shark in the face.

It's a film about an extraordinary man with a relentless never-say-die spirit. Mind you, from what we've heard, the film doesn't quite meet up to the legend. Instead, it meets it half-way - this is a decent effort at encapsulating an astonishing life.

Buy Unbroken on Blu-ray at Amazon

Buy Commando on Blu-ray at Amazon

After defeating their city rivals in the quarter-finals, Real Madrid go up against Massimo Allegri's Juventus for a place in the Champions League final.

Madrid are looking for their second European cup in a row (a feat no club has achieved for more than 20 years), while for Juventus this is the furthest they've been in competition for 12 years. There's a lot at stake and it could take a mistake to settle the tie.

The Trap. Wells' secret is out in the open, so now it's up to the STAR Labs team to set a trap. Using Cisco as bait.

Will Wells fall for the ruse, or have they put our favourite character in danger again?

They're also strangely fascinating, as long as you don't look into their soulless eyes for too long. This documentary gives us an insight into the way different kinds of sharks (blacktips, tasselled wobbegongs, Greenlands, whitetips and the great whites) go about their daily life as the great predators of the ocean.

Fresh Hell. The star-studded Gothic Victorian horror returns. Vanessa (Eva Green) is plagued by visions of occult images - is the devil himself coming for her?

After the bloodbath at the inn, Ethan (Josh Hartnett) decides to leave London, unaware that Victor Frankenstein (Harry Treadaway) has brought Brona (Billie Piper) back from the dead.

Sons of the Harpy. Cersei resurrects the aggressive Faith Militant, who rain down the Seven's justice on all the debauchery in King's Landing. Which is a lot.

Bronn and Jaime make an entertaining double-act as they head down to Dorne to rescue Myrcella from the vengeful grasp of the kickass Sand Sisters.

Meanwhile in Essos, Daenerys struggles to control an uprising.

Pep Guardiola, the man who won so many trophies in his time at Barcelona, returns to the Nou Camp with his Bayern Munich team looking to secure a place in the Champions League final.

It won't be easy, as Barcelona have been nicely ticking over in the past few weeks (and warmed up with an 8-0 win). There will be no sympathy on either side as two heavyweights of European football go mano a mano.

Seasoned diner Gregg Wallace is inside one of the world's biggest chocolate factories in York. But this isn't just his normal Wednesday - he's showing us how the Cadbury's factory makes a staggering seven million chocolate bars a day.

This is part of the How Our Favourite Foods Are Made series, and we find out what it takes for a bar of the good stuff to get from cocoa beans into our mouths via a shiny wrapper.

It's the big day tomorrow, so it's one last look back at the crazy 2015 election season and its coverage through Charlie Brooker's irreverant, anger-tinted glasses.

Brad Bird's (director of the upcoming Tomorrowland: A World Beyond) The Iron Giant stomps its way on to Amazon Prime Instant Video and it's still (we think) an underrated gem.

Based on Ted Hughes's fable (The Iron Man - no, not that one), it's less like the book and more like an animated E.T. Still, while that makes it a lot more kid-friendly, this is a smart adaptation, and it looks lovely, too.

This Is Your Sword. Oliver sets his mind on the final two tasks to transform into the Demon's Head (not literally) in the penultimate episode of series three.

Thea and Roy reunite, while Ra's al Ghoul decides to dispatch his other daughter.

Well, it's happened. And now the counting, the speculating, and even more speculating begins until every last vote is counted.

We won't find out who's won until tomorrow morning, so sit down with a bowl of popcorn and Twitter - it's going to be a long night.

Lost Horizon. Sterling Cooper is being swallowed up by McCann, and the takeover isn't going smoothly. It's a new age of advertising, one that's far too corporate and mechanical for everyone's liking, but will they all grin and bear it?

Melinda. Ever wondered why they call her 'The Cavalry'? As she finds herself stuck between Coulson and Gonzales while also hunting for Skye, we get the backstory of Agent May, and how she came to be the feared agent that everyone respects and, er, fears.

Have I Got Election News For You BBC One HD, 9.30pm

Ian Hislop and Paul Merton are joined by Romesh Ranganathan and Jo Brand as they dissect and discuss the election (it will be over soon, don't worry).

Hitchcock's finest hour, with James Stewart playing an ex-police officer with a phobia of heights who's hired to follow his friend's wife, in this gripping psychological thriller.

As he becomes increasingly obsessed with the woman - Kim Novak in fine femme fatale mode - he discovers that she may not be who she seems.

John Hannah as Aeson, father to Jason, has been the best thing to happen to Atlantis (if you're still watching). With Jason kidnapped by Pasiphae, it's up to Aeson to save his son.

But he is just one man, and Pasiphae has an entire army. She's also his ex-wife, tried to curse him, and now keeps trying to kill their son.

The Spanish Grand Prix. We're in sunny Barcelona, the beginning of the European leg of the Formula One season with teams looking to bring upgrades to their cars and trying to offer some hope that Mercedes won't run away with the title.

There are plenty of stories worth investing in, with Rosberg needing a big performance to challenge Hamilton and Ferarri looking to build on impressive recent form. And surely McLaren really ought to have made some more progress with their Honda-powered car?

'Boring, boring' Chelsea have sauntered to the Premier League title but the work's not done yet as Liverpool turn up at Stamford Bridge with a place in the Champions League still within reach. A defeat here will effectively end their ambitions in the European elite for next season, a defeat would spoil Jose Mourinho's ridiculous home record.

Or the TV Baftas, for short. Graham Norton hosts the starry gala from the Theatre Royal Drury Lane in London, and this year's nominations include Tom Hollander, Olivia Colman, Sheridan Smith, Benedict Cumberbatch, Ant and Dec, House of Cards, The Great British Bake Off and more.