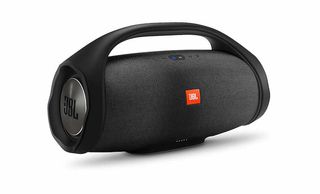 If Radio Raheem (of Spike Lee's Do The Right Thing fame) was rebooted in 2017, he might be interested in the JBL Boombox. At 50cm long and weighing around 5kg, this Bluetooth connected speaker is the largest in the company's line-up.

It's also waterproof, so should be able to survive the odd spillage or splash, making it ideal for picnics or lounging by the pool.

The Boombox is powered by a huge 20,000 mAh battery, which JBL claims can last up to 24 hours on one charge. Dual USB ports mean it's also a useful hub for charging smartphones and tablets.

The speaker is equipped with four active speaker elements and two passive bass elements, and can be paired with other speakers using the JBL Connect + functionality. The company recently won a Guinness Book of Records award for the most Bluetooth speakers paired together.

We don't yet have an official release date, but the JBL Boombox will be unveiled at IFA 2017 in Berlin next month, and is expected to retail for around £400.

Introducing the new-look What Hi-Fi? Awards for 2017