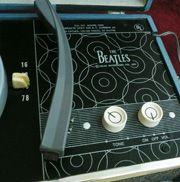 A Beatles record player, one of a limited run of around 5000 made for fans of the band back in 1964, has sold for $12,100 (£7700) on eBay, doubling the previous best price recorded by auction tracking website WhatSellsBest.com.

Sold by a specialist Beatles memorabilia dealer in Scottsdale, Arizona, the NEMs 1000 record player was advertised as the best of its kind the seller had ever offered; he added 'it even edges the one I owned myself in 1982, which before now... Held the title!'

The four-speed record player, embellished with pictures and facsimile autographs of John, Paul, George and Ringo, was fully operational, and with all parts including its original serial number tag intact.

The Beatles arrive in America, February 7, 1964

It was made in 1964, when The Beatles first visited America on the back of huge sales of their single I Want to Hold Your Hand: the first visit was in February of that year, when they played concerts and appeared on TV, and they returned in August 1964, and again a year later, for further tours.

The player had an opening bid of 99 cents, and over ten days received 29 bids from 16 bidders.