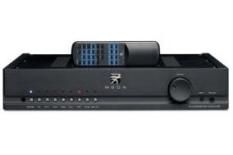 The Moon's lack of all-out precision holds it back from five, but four stars in this competitive sector is still mighty impressive

Moon's roots are more in the realms of high-end than any other company here. In fact, the i-1 is what the Canadian company considers to be an entry-level product.

On initial inspection it's easy to agree with that tag – the i-1's styling and quality of build is a little uninspiring, and ditto the remote – but get the unit pumping out tunes and it's obvious this is worthy of the Moon name.

Big, bassy, flowing sound
The i-1's approach is to provide a big, bassy, flowing performance, and this means it's always a pleasure to listen to. Play the bombastic opening of Aggressive Expansion from The Dark Knight soundtrack, and the Moon is thrilling, producing perhaps the biggest, deepest soundstage on test.

The bass is heart-thumpingly low, the drums in the midrange are terrifically full-bodied, and the whole track ebbs and flows with smooth dynamism.

There is a compromise to be had for all that fluidity though, and it comes in the form of precision and resolution.

The Moon doesn't reveal quite enough of the texture and delicacy of the solo violin in the track's quieter sections, and although that bass is extremely deep, it's a bit loose and overbearing compared to other amps on test here.

Focused delivery of vocals
Switch to the more simple Heart Skipped a Beat by The xx, and the Moon proves to be a dab hand at bringing forward and focusing the vocals, making the performance an engaging one.

However, it still misses a touch of the nuance in the delivery, while a degree of snap is missing from the electronic beat. Skip to follow up track Fantasy and we're once again yearning for some extra definition and tautness in the bass.

It's a bit of a shame really, but evidence that although the world of hi-fi revolves at a more leisurely pace than that of home cinema, it's still moving forward: since the i-1 last received five stars, the Cyrus 8 XP has emerged to raise the resolution bar, while Roksan's Caspian M-Series has found a way to combine weight with attack.

Of course, there are plenty of people who'll find much to love in the Moon's delivery – it makes everything you play through it sound big, chunky and rich, rather like Brian Blessed – but for those who want to hear their music do the talking, rather than the amp, there are now even better options.