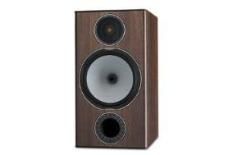 Best stereo speakers £200-£350, Awards 2012. The BX2s are quite an achievement and some of the most engaging speakers you can buy at this money

These Monitor Audio speakers are dressed to impress, boasting an attractive finish and feel that's seldom found at this price.

The magnetic grilles are a neat touch, but don't really do this speaker justice. Peel them away and the BX2s clean-cut design is revealed in all its glory.

Clever construction aids sound
The tweeter bolts lurk out of sight behind the protective mesh, while the mid/bass driver is held firm by a single bolt that goes through the enclosure's back panel.

Not only does this clean up the BX2s' looks, but the lack of any additional screws around the driver means that the amount of vibration fed into the cabinet is reduced. Monitor Audio claims that the knock-on effect is much-improved sound clarity.

The company has also worked hard to improve the drive units in the BX2s. The 25mm dome tweeter and 16.5cm mid/bass driver both use C-CAM (Ceramic Coated Aluminium Magnesium) material in their construction.

Monitor Audio has developed the tweeter to improve sensitivity, bandwidth and resolution, while the mid/bass driver's motor unit and chassis have been tweaked using ideas formed during the making of the company's impressive RX range.

The resultant sound is seriously absorbing. The BX2s capture all the drama of Metallica's S&M concert, whether it's the massive roar of approval from the crowd as the band takes the stage or the enthusiastic axe-work that can be heard during Enter Sandman.

The BX2s are also on top of their game as far as resolution is concerned. They're wonderfully insightful and take great care in peeling back the layers of a track, unearthing a ridiculous level of detail for the money.

During Paloma Faith's version of Sexy Chick, taken from BBC Radio 1's Live Lounge recordings, you can feel all the emotion attached to her vocal, the BX2s allowing you to catch even the smallest, most subtle
of details from the piano and percussion instruments being played in the background of the studio.

An added bonus is that the Monitor Audios are relatively unfussy when it comes to positioning. This flexibility means that they're still capable of producing a decent stereo image when squeezed up to a rear wall.

Bi-wiring is another matter: we found that although the soundstage was a touch more open, it also became disorganized and the speakers lost confidence and precision. We preferred the single-wired listening experience.

For the money, though, the BX2s are stupendously good and give their price rivals much to worry about.