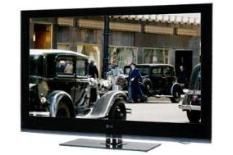 The LG’s affordable and balanced, but you don’t have to pay much extra for a more exciting performance

The £1200 price-tag attached to this smart-looking LG when we first tested it back in May was cheap enough to impress.

It's available for even less now and is one of the cheapest sets in its class, if not by quite as big a margin as you might expect.

That tempting price-tag hasn't come at the expense of tech-specs though.

On the contrary, the '8000 comes bristling with market-leading features such as 600Hz sub-field drive motion processing, a THX Display Certification and built-in ISF calibrator, plus Bluetooth, USB and four HDMI connections.

A good, reliable performer
As it happens not all of these features are entirely worth it – a normal THX Optimizer disc provides better results than the ISF Calibrator and THX modes – but that doesn't prevent the LG from being a decent option, thanks to an impressively reliable performance.

The natural balance of the LG's pictures lends itself well to the Black Sheep Blu-ray. New Zealand's rolling hills are organically green, while the sunset avoids over-saturation, and our hero's skin has a well-judged flushed paleness.

Edges are pleasingly sharp throughout, but it's fair to say that the set doesn't have the fine-detail recovery of the best.

It doesn't quite have the purity of whites to make those genetically modified sheep really stand out, either, and you'll find deeper blacks elsewhere. Still, the picture remains balanced and watchable.

Pictures look a little soft
These traits are amplified by DVD. Our copy of He's Just Not That Into You looks a little soft and lacking in contrast compared with the very best, but is saved by a pleasing colour palette and overall picture cleanliness.

The scaler also fails to be troubled by the challenge offered by Freeview's BBC News 24, producing a stable, noise-free image complete with clean moving text and natural skintones. There is an overall softness, though.

Whatever the source, motion is reasonably smooth, though perhaps not to the extent that 600Hz processing might suggest, while sound is neither better nor worse than we'd expect.

That's this set summed-up, really: it's watchable and enjoyable, but it doesn't have the ability to stun. It's cheaper than some rivals, but the margin isn't big enough for an extra star.