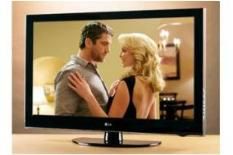 Once considered ‘stunning for the cash’, the 42LH5000 will now have to make do with being ‘very good indeed’

When we first looked at the 42LH5000 last year, we were blown away by the features and performance it offered for just £750.

Indeed, we liked it so much we deemed it the Best Budget 40-42in TV in our 2009 Awards. But a product can only be as good as the competition allows, and the LG now has to compete against cheaper and faster rivals.

Looks like a premium set
Of course, that's not to say the LG has suddenly become a poor TV. In fact, as soon as you take it from the box it's clear this is a set that's easily punching above its price point.

Although the casework is fairly large, it's also very stylish, and the bold, colourful and well thought-out menus add to the premium feeling.

The clarity of these menus helps to make calibration a simple task, and other than a bit of experimentation with the TruMotion 200Hz processor, you'll be up and running in no time.

Surprised you get 200Hz processing on a £750 set? We were, too. It's not as universally favoured as that of rivals like Sony, with an artificial look occasionally creeping in, but it's still an impressive handler of motion.

This is by no means the only way that the LG's Blu-ray performance impresses. (500) Days of Summer benefits from a subtle, natural colour balance, as well as pure and punchy whites.

The 'LH5000 is also detailed and sharp enough to reveal the odd imperfection in the cast of kooky characters.

Churlish to complain?
However, where previously we felt the ultra-low price made it churlish to complain about the lack of black depth, the appearance of more capable rivals now enables us to do so: it turns out you can get proper, deep blacks at this price point.

The LG offers a very stable and detailed picture for the money with the scaler combining with the Freeview tuner to impressive effect as well: that neutral colour balance keeps even the garish backgrounds of The One Show in check, and if there's a touch of noise, the overall cleanliness is decent.

The LG's speakers are perfectly reasonable by flatscreen standards, with just a little brightness creeping in, and they round off a package that, while no longer the very best at the money, is still mighty accomplished.