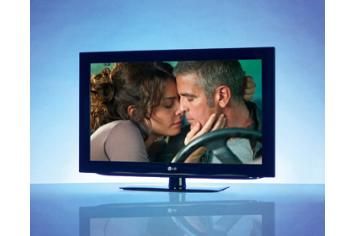 Not bad, but spend a bit more (or a little less, for that matter) and you’ll get much-improved performance

For some televisions, it can take a few months to see any significant drop in price, but LG has gone straight for the kill, and your wallets, with its new 32LD490.

Pricing has been set aggressively from the get-go, so the fact that other comparable TVs cost twice as as much could stand this flatscreen in good stead.

Well, as long as its picture performance is up to scratch, that is…

Plenty of connectivity
The LD490 is a modest-looking set compared with equivalent Sony and Philips models. The use of a CCFL backlight (as opposed to LED) means it carries a few extra pounds and a bit of extra girth over its LED brothers.

Connectivity options are okay for the money. There are three HDMI inputs at your disposal, together with a set of component video inputs and a solitary SCART socket.

NetCast is LG's gateway to online services and it's nice to see that BBC's iPlayer can be accessed through this portal, while the Twitterati can also access their accounts should they wish.

The TV's main menu page gives you a selection of large, colourful icons to choose from, although the sub-menus feel a little cramped. Matters aren't helped by a remote control whose D-pad feels vague and imprecise.

On the plus side, though, it is backlit and there's a small speed bump to show your thumb where the volume and channel-change buttons sit when you're flipping in the dark.

A small contrast ratio
The TV's 60,000:1 contrast ratio appears relatively minuscule next to some of the figures bandied around
by other TVs but we tend to let picture quality – not a spec sheet – do the talking.

You couldn't describe the LG's image as offensive. Unlike some comparable LCDs, the LG's backlight shines evenly and consistently.

In Mirrors, as Kiefer Sutherland's character wanders tentatively around the old Mayflower department store, there's good richness to blacks, even if the level of fine detail can't quite trouble the very best.

Switch from the horror of Mirrors to the horror that is the reboot of The Karate Kid and the LG shows a colour palette that's calm and considered.

Freeview HD images are perfectly watchable but not quite as pristine and proper when compared to the class-leaders. The TV gives a detailed, insightful account of the This Morning studio, as well as presenters and guests. Colours are striking, but natural.

Motion performance disappoints
This set's Achilles' heel is motion. Slow or fast pans trigger a juddering, staccato on-screen effect and unfortunately no amount of picture tweaking can resolve the issue. Other screens boast a much firmer grip on the action.

For the money, you can't criticize the LG too harshly, but it won't take much more investigating or investment to find a far superior set.