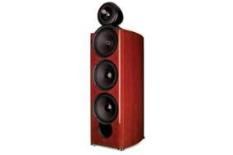 Much impressed us, from the superb wood finish to the way they looked in our largest room

KEF's no stranger to designing big, multi-driver, multi-enclosure speakers for its Reference series; take a look on the company's website, and you'll see founder Raymond Cooke in the anechoic chamber with just such a design.

But the 207/2 is probably the most elegant example of the breed yet, with a curvaceous cabinet, shaped like a flattened teardrop in plan view, and finished in a choice of superb wood veneers.

Inside this, the two 25cm bass units sit in their own 70-litre enclosures, with the 25cm low midrange driver similarly isolated. Finally there's a 16.5cm midrange driver mounted in a Uni-Q arrangement with a 25mm dome tweeter at its centre, the combination housed in that ‘vintage car lamp' housing on the top of each speaker.

Accessories wonderfully presented
Above the terminals to the rear are three screw-in points accepting little ‘caps', which can be used to adjust the bass to suit free-space use or close-to-a-wall position­ing, along with a choice of cut or flat response; these caps and the spikes come in a smart wooden box that looks like it should contain duelling pistols.

The speakers are massively built as well as looking good: each one weighs 66kg and stands 123cm tall, so for all that adjustability, you really don't want to try using these in a very small room.

Neither should you really consider these speakers if the pricetag stretches your budget to the point where you have to compromise on the rest of the system: over an extended period of testing we tried the 207/2s with a range of sources, amplification and cables, and with each change the balance of the speakers underwent a transformation. We even tried them in several rooms, just to make sure we'd got the measure of them.

You can turn them up to 11
The long-considered opinion, then, is that the KEFs are very fine speakers, capable of delivering the kind of bass and dynamics you feel as much as hear and, with a degree of fiddling with position, creating a more than credible soundstage that's well into ‘close your eyes and you're there' territory.

They can also go incredibly loud should your amplifier be up to the task, meaning they're anything but one-trick classical ponies. We do have one gripe, though – just enough to dock a star: all those drive units can lead to a slightly con­fused sonic picture.

It's nothing too disastrous, but the KEFs didn't quite blow us away on this aspect. Even so, we're still big fans. While not flawless, there's more than enough to admire here – so long as you've the room for them. Oh, and the cash…