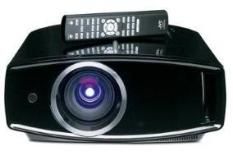 Those of you with high-end home cinema systems should definitely try out the JVC – at this price point, it's excellent

We've reviewed more than our fair share of THX-certified speaker packages and home cinema amps. However, projectors that carry the THX logo are a rarer sight.

To earn its certificate, the JVC DLA-HD750 has had to go through THX's rigorous testing process, covering all areas of performance from picture processing to fan noise.

But, there's more to this machine than a logo. The 'HD750 is JVC's top-of-the-range front projector. It's a Full HD model that uses JVC's D-ILA technology. It also uses a high-quality Reon XV picture processor, from Silicon Optix.

Narrow appearance appeals
Compared to JVC's Award-winning DLA-HD100, this model is more compact. Changes have been made to the lens aperture and optical section to help reduce light loss and help contribute to the unit's claimed 50,000:1 contrast ratio.

As you'd expect from a high-end projector, the DLA-HD750 is very thorough when it comes to set-up and specification. These include dual HDMI sockets, a PC input and a set of component video inputs.

The remote control isn't what you'd call flashy, but it is functional and backlit. Operations such as focus, zoom and lens shift are motorised, which aids set-up. There are nine picture modes to choose from and three customisable settings.

From the metalwork of each panel to the tread on the tyres, the JVC keeps on giving. Even upscaled standard definition images look superb. The transfer of Tropic Thunder looks clear and cohesive, displaying good edge definition and natural colours.

If you want a huge, high-end picture, we have no hesitation in recommending this JVC. It's a serious contender for best in class.