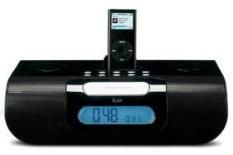 Not a bad product, but scores the odd miss as well as a few hits. Replaced by the iMM178DAB

Not a day goes past without some specious iPod accessory or other turning up at our offices. They're almost always variations on a piano-black/ice-white theme, and invariably have some facetious feature or other attached in the name of modernity.

Feature full
Life's too short to exhaustively investigate them all, frankly, but the best (and worst, too) are often worthy of inclusion in these pages. And despite its cringeworthy name, the iLuv is one of the better iPod docks/speaker systems/radio-alarms we've seen and heard for quite a while.

The iL77 is sensibly sized to fit on your bedside table. It's a tidy looker, with docking and charging for all current iPods (including Shuffles, which makes a nice change) as well as AM and FM radio reception. The display is big and bold, handy for those bleary ‘first-thing' time-checks, and the alarm goes loud enough to wake next door, too. Naturally, it's available in black or white. There's even a little remote control for those whose bedside table is out of arm's reach.

What's it sound like?
In action, it's a pretty composed performer when playing back via an iPod: the midrange, especially, is poised and distinct. There's even a game stab at low frequencies, which are well controlled and meaningfully deep, while the top end fights shy of the sibilance that commonly afflicts less capable designs.

Radio reception is variable, thanks mainly to the hardwired aerial, which leaves the i177 as a useful iPod dock/speaker system with a handy alarm facility, too. If that last feature is particularly important to you, then you must check the iLuv out – but if it isn't, you're better off with one of the alternatives.