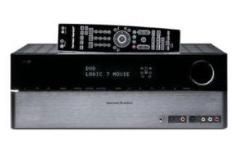 We have to take our hat off the Harman Kardon AVR-255. From the minimalist fascia to the neon white lights that gently glow from the standby button, there isn't another receiver here that can match its attractive demeanour.

The refinement and sophistication that oozes from the AVR-255 extends to the on-screen menus. Not only are the graphics attractive but you can navigate them without any hassle, assigning inputs to various sources and accessing other features of the receiver, including video upconversion and 1080p upscaling courtesy of Faroudja.

The receiver's clunky remote does its best to hinder the user experience, but the AVR-255 emerges relatively unscathed. And, as with all the other receivers on test, the Harman Kardon is equipped with its own calibration system and set-up mic – EzSetEQ equalisation is a simple, painless affair.

One area where the Harman earns brownie points is with video upscaling. Send in a standard definition DVD via component video and the Harman will produce a picture that struggles to be bettered by other upscaling units here.

Sonically beefy, yet restrained
Switching to sound, the AVR-255 throws its weight around with a meaty, hefty performance. During the climax to Transformers, the AVR-255 rumbles along nicely and plummets to decent depths when the action demands it.

On the whole though, the Harman Kardon sounds restrained. It restricts itself to a very safe sound that on the one hand sounds inoffensive, but on the other struggles to capture the dramatic soundtrack of Indiana Jones and the Kingdom of the Crystal Skull. Dynamically, it can't scale the same heights as the Sony or either of the Yamahas on test.

It's a similar story with CD playback. Even using the receiver's Stereo Direct mode can't drag the AVR-255 out from its dynamic lull, with REM's Losing My Religion lacking transparency and detail.

We're left feeling rather frustrated by the AVR-255. After wowing us with its looks and features, it falls short where it matters the most: sound quality.