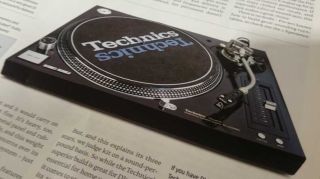 There is a new Technics turntable on the way. Announced last week at IFA in Berlin, the new Technics deck looks set to be a "hi-fi" turntable rather than a DJ deck - the company is arguably more famous for the latter, certainly in recent memory.

The Technics SL-1200 range began life all the way back in 1972 and remained in production until 2010. From the Mk2 version onwards, the 1210 was born, with the change in number indicating that the deck had a different finish when it went on sale in the US and Europe (black as opposed to silver).

Various generations of the turntable followed, with the SL-1200MK6, which was released in 2008, being the last Technics turntable in the SL-1200 range.

While its main market may have been bedroom and professional DJs alike, we gave the SL-1210 the review treatment back in 2005. And the results may surprise you...

Let's cut to the chase: the £550 turntable was on the end of a three-star review and left languishing behind five-star record players from Clearaudio and Pro-ject.

But the star rating, as is often the case, was only half the story, as our verdict made clear: "The Technics loses out on a strictly sound-per-pound basis, but when it comes to solid build and DJ-dependability it wins the battle."

And knowing the brouhaha the review might cause, we tackled the issue head-on: "This three-star verdict might perplex many a DJ, and we can understand the initial confusion..."

We recognised that all the bells and whistles necessary for mixing records - such as the pitch control and reset button - were present, but felt duty bound to see how it measured up sonically. However, we concluded that: "when it comes to sound, it's not a match for its test rivals."

The review continued: "It slams out lower midrange and upper bass with force... but switch to the more refined moments... and there's a lack of subtlety."

We appreciated the SL-1210's "virtually indestructible build", heavyweight design and extensive features, and were happy to declare it "a very good DJ deck".

And if there was any doubt, our final words made it clear: "...only an average verdict, but despite that we all still love this classic turntable."

We look forward to seeing whether the next Technics turntable can continue the legacy.