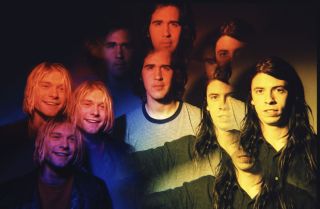 September 1991: Geffen Records sends 46,000 copies of Nevermind (Nirvana’s second album and their first for the label) to US stores. 35,000 copies ship to the UK, where debut album Bleach was relatively successful.

By January 1992, when Nevermind usurps Michael Jackson’s Dangerous at the top of the charts, it’s selling 300,000 copies a week. Record companies, of course, don’t get fooled again.

To celebrate Nevermind’s 20th birthday, and to entrench its status as the same kind of of generation-defining recording as Sgt Pepper’s Lonely Hearts Club Band or Never Mind The Bollocks… Universal has, basically, pulled out all the stops to establish this album as an undisputed all-time classic.

One can speculate as to how Kurt Cobain would have reacted to his record’s re-release in ‘Deluxe’ and ‘Super Deluxe’ editions, but anyone interested in the gestation of a pivotal album (or in hearing a better- balanced mastering of the album itself) is well served here.

The more modest ‘Deluxe’ edition comprises a remastered original album, contemporaneous B-sides and a selection of radio sessions, rehearsals and early passes through the songs. Need to know how Stay Away grew from a song called Pay To Play? Want to hear a wonky reading of The Velvet Underground’s Here She Comes Now recorded at producer Butch Vig’s studio while the band whips the Nevermind songs into shape? Dive right in.

The ‘Super Deluxe’ package also has the entire album (minus Polly and Endless, Nameless) as mixed by Butch Vig before he and the band handed mixing duties to Slayer producer Andy Marshall. There’s also the whole Halloween 1991 concert at Seattle’s Paramount Theatre on both CD and DVD – the DVD also includes all four Nevermind singles’ videos.

A lot of the extra material is strictly for completists and über-fans – it’s kind of interesting to hear Come As You Are, On A Plain, Smells Like Teen Spirit and so on developing via a boombox in the corner of a rehearsal room, but equally it’s rather like shining light on magic.

There are moments of transcendence, though: the John Peel Session take of Something In The Way is even more troublingly desolate and vivid than the utterly defeated version that pitched up on the album. The remastering of the album itself is a subtle affair.

A little of the early- Nineties bombast and shine has been buffed out of the drum-sound (although Dave Grohl’s delirious levels of attack remain), there’s a degree more openness to the presentation, and a touch more dynamism to the quiet/loud/quiet template.

Mostly, though, it serves to confirm Cobain’s fearsome melodic power and demonstrates just how right this album was in the first place.