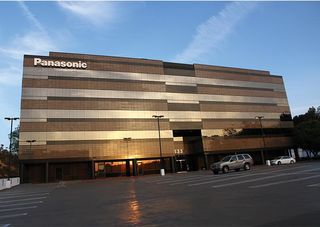 While the UK’s been enjoying an unexpected heatwave, I’ve been on the west coast of North America (where the definition of a heatwave is much different) as a guest of Panasonic.

The Japanese company has been explaining its philosophy as regards the way it goes about producing televisions, and it invited quite a number of its big-hitting business partners to state their cases too.

First stop was Panasonic Hollywood Lab in Los Angeles, California. Although the company recently moved to a new facility (just a few blocks from the old one at Universal City), PHL has been a Hollywood fixture since 1993 (when it opened its High Definition Television Centre. The first PHL opened its doors in 2001).

Throughout that period, Panasonic has worked closely with its Hollywood partners to try to bring the cinema experience to the home consumer. Through the development of DVD, Blu-ray, 3D Blu-ray, and now 4K Ultra High-Definition and High Dynamic Range formats, it has focused rigorously on the best way to bring the film director’s vision to the domestic viewer.

Here I heard from Ron Martin, the Director of PHL. He’s a personable and engaging guy with nearly 40 years experience in his field, and remarkably open (up to a point) about the technological challenges facing the broadcasting and distribution arms of the Hollywood machine.

Currently he’s focusing all his efforts around the Blu-ray Disc Association and its desire to bring Ultra High-Definition 4K Blu-ray video (plus associated wide-colour gamut and High Dynamic Range technologies) to consumers.

He (like Panasonic in general) is happy to discuss the specifics of the technology that’s involved (which we reported on here a couple of months ago) while being extremely guarded about the specifics of products.

I asked him if he personally was in possession of any 4K/UHD software, and he said “yes”. I asked if I could see it and he said “no”.

(It’s worth mentioning at this point that my PHL appointment also included a look at, and demonstration of, quite a number of interesting and exciting new Panasonic TVs. The very earliest I am allowed to report on any of these is 2 September, when they will be officially launched at IFA in Berlin.)

Also at PHL I met with Daryn Okada ASC, a California native and three-time President of the American Society of Cinematographers. As a director of photography Daryn’s renowned throughout Hollywood, and when he’s not serving as DP on films such as Anna Karenina or Mean Girls he sits on the Science and Technology Council of the Academy of Motion Pictures Arts and Sciences. In short, he knows his stuff – and when he talks about the visual language of film he’s almost transcendent.

Panasonic, of course, has long been one of the industry’s leaders where both hardware (from cameras to TVs) and software (from mastering protocols to consumer-ready discs) are concerned, and Yasushi is eloquent on the subject of the new ‘4K Studio Master Processor’ chipset that’s to be fitted to all those new Panasonic displays I can’t yet talk about.

His eloquence is undermined rather by the absolutely impenetrable technical slides he accompanies his talk with.

Next up is a visit to the legendary Technicolor on Sunset Boulevard. A post-production/creative services leviathan that’s just celebrated its centenary, Technicolor is a ubiquitous Hollywood presence and a default port of call for post-production duties where both movie and TV production companies alike are concerned.

During a talk about Technicolor’s importance to the creative process, technical operations manager Robert Rodriguez demonstrates exactly how big an influence the company has on the images we all see on our screens.

From minimising the crow’s-feet around The Talent’s eyes to highlighting the darker tones in a scene to create a more foreboding look, Technicolor is capable of having a huge impact on what we finally see on-screen.

Imagine your favourite film’s soundtrack, and now imagine the effect switching from major to minor chords (or vice versa) would have on the movie’s overall feel – visually, that’s the sort of power Technicolor wields over a finished product.

At some point in my tour around Technicolor’s extensive premises it becomes apparent all its mastering work is done on Panasonic monitors.

A legendary (and legendarily hard-to-access) facility, Skywalker Ranch is where Lucas has planned, created and executed an absolute plethora of enormously successful movies while cultivating olive groves, vineyards and a pastoral, bucolic vibe that puts me in mind of how I imagine California’s sun-baked, hippy past to be – as I arrive there’s an actual hay-ride taking place.

Lucas and his Skywalker staff are extraordinarily wary of journalists and publicity in general, so I must restrict myself to describing the Ranch itself as a fanatically tidy, fanatically crafted house on the grand scale, a million miles from the hot-headed, loud-mouthed Hollywood experience I’ve recently left behind. Oh, and that its kitchen serves up quite the best chicken burrito I’ve ever tasted.

From there it’s a short, oppressively warm walk down a mountain-side to Skywalker Sound, an equally impressive, equally guarded facility that has in recent times been acquired by the Disney Corporation.

I’m privileged in the extreme to be shown its Stag Theatre (just your bog-standard 300-seater Dolby Atmos-equipped private screening room that’s easily the most comfortable and most lavishly appointed cinema I’ve ever set foot inside), and its Studio One (a recording studio/performance area that’s big enough to comfortably accommodate a symphony orchestra and that is, I’m informed, modelled closely on Abbey Road’s Studio One where John Williams recorded his deathless Star Wars score).

At every turn there’s attention to detail and an evident, painstaking and undoubtedly extremely expensive commitment to doing absolutely the best job possible. The entire visit is frankly dizzying, and the Skywalker staff’s dedication to excellence is obvious.

My final port of call is to 3210 Kerner Boulevard in San Rafael, the premises where George Lucas originally founded Industrial Light and Magic, and where a company called 32Ten now provides physical special effects (as opposed to CGI) for films like Pacific Rim and The Lone Ranger.

With heavy lathes at every turn, much of the lot resembles nothing more than an extremely well appointed workshop – albeit one with a large green-screen soundstage and walls pockmarked by carefully supervised explosions (as COO Greg Maloney says, “there’s nothing like carefully building something beautiful and then blowing it up”).

Also in attendance at 32Ten’s screening room (which is really more like a medium-sized cinema) are a number of folks from industry audio specialists THX, as well as Oscar-winning special effects guru Phil Tippett.

Tippett talks about his career, from 8mm home-made short films to supervising the effects-intensive Jurassic Park (“I finally saw the completed film and I thought: ‘this is not terrible’”), while THX’s Senior Design Engineer Steve Martz talks through the extraordinarily rigorous standards of performance every electrical product must meet if it wants to wear the THX logo.

Panasonic, of course, has a long association with THX, and its higher-end models routinely feature THX-approved picture presets.

In the space of two rather hectic days, then, I’ve had brought forcibly home what I instinctively knew to be true: that everyone involved in the creation, the post-production and the delivery of TV shows and movies into our homes is giving it their all, at every moment.

Panasonic’s avowed intention to be as true to a director’s vision for their film as possible is not a hollow or glib claim. It’s one that informs everything the company does.