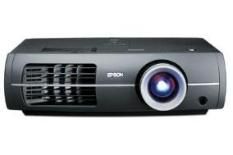 Good, but not quite good enough to match the best. Find a good deal, and it’s worth investigating

Epson knows what it's doing when it comes to making projectors.

The world's largest manufacturer of LCD designs has a huge line-up, and they've been well-received, too. This model is one of a range that has quietly but confidently impressed us in recent months.

The EH-TW5500 sits alongside the £500 cheaper EH-TW5800 and shares plenty of that model's technology.

For a start, they're both 3LCD machines, using transmissive LCD technology where, simply put, light is shone through a grid array of pixels to deliver a picture.

Improved contrast ratio
1080p resolution, two HDMI 1.3a inputs and a claimed contrast ratio of 200,000:1 complete the picture (that last figure being one of the key changes in specification in comparison to the cheaper sibling).

Getting your picture on your wall, or ideally your screen, is fairly simple, though not quite as slick as the motorised processes offered by some rivals.

A bit of pointing and turning of control wheels sees us right. The box itself is manageable and indeed curvaceous, so if it's going to be on show it's a little easier on the eye than its competitors.

Connections are round the back, which seems logical to us, and the backlit remote is as efficient
as we might hope.

Enjoying as best we can the rather clumsy and formulaic action of The Taking Of Pelham 123, it's clear the Epson won't disgrace itself.

Decent black levels
Colours are bold and full-bodied, if leaving skintones a little too ruddy at times, while whites are bright and clean.

We can't quite discern the same amount of detail in the dark tunnel scenes that some rivals deliver, but there's decent texture and strength to black levels.

Switch to The Lord of the Rings on Blu-ray and, while we enjoy what we see, the process of comparative testing finds the 'TW5500 coming up a little short when it comes to subtlety and texture.

There's not quite the breadth of colour to cloaks, hobbits and Middle Earth in general, which means a slight loss of realism and that all-important sense of depth.

All told, this is still a highly capable projector, easy to live with and eminently capable of delivering the quality of pictures that we expect from a £4000 projector.

Only a lack of subtlety and finite detail sees it come up short compared to the best in class.