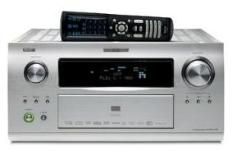 There's no disputing the visual impact of the Denon AVC-A1HDA. It's lavishly constructed, with its all-metal vibration-inhibiting chassis making a great first impression.

Thoughtful loudspeaker-terminal arrangements allow for considerable flexibility, and you can plug in more speakers for second zones of listening, for example, only diverting amplification to them when needed.

The AVC-A1HDA's electronic ‘brain' is every bit as potent. It uses three 32-bit processors: one for decoding digital data, one for surround processing, and one specifically to handle THX post-processing modes.

This is backed by six powerful 24-bit/192kHz Burr-Brown DACs, while an extra 24/192 ADC (of slightly different design) takes care of analogue-to-digital conversion for your analogue sources.

Cinema-quality experience
All this number-crunching endows the Denon with more than enough thinking power to accurately move sound around your room in suitably sweeping style.

And while it's capable of much more, it's this cinema-quality experience that most appeals about the AVC-A1HDA.

If the bullets are flying thick and fast, the Denon simply laps it up, powering out each detonation and impact with just the right blend of energy and control.

Tonally, it's also just right: neither too bright or smooth, very adept at generating realistic character and presence with voices, and beautifully judged with subtler, off-camera effects.

There'll be some who point at the Denon's seven-channel power amp configuration and argue that it's inferior to its deadly rivals from Pioneer and Yamaha, but for many, we'd wager it doesn't matter.

Besides, the Denon is cheaper. That, in our view, has to make it something of a bargain – yes, even at that price.