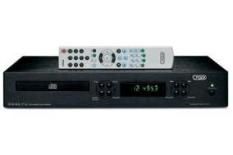 If you're familiar with Creek, you'll have a good idea of what this Destiny sounds like; much to admire, but plays it a little safe sonically

We feel like we're banging on, but the build and design of this CD player is worthy of recognition. We've been critical of Creek's efforts in this department in the past, so we're happy to report it's upped its game.

The casing is more substantial than previous efforts, while the tray, buttons and display are of the standard we'd expect for the money - unlike some rivals.

The Destiny builds on the standard set by the CD50 Mk2, a four-star, £850 player that's a good few years old now - but predictably looks to offer a real step-up in quality for the extra outlay. It retains, however, many of its sonic qualities, which is no bad thing.

Switching to REM's latest, surprisingly noisy, outing and there's never much danger of the sound hardening up or becoming abrasive. The flipside is that there is a lack of attack and drive, and for all the flow and fluidity of the Destiny's fine timing, we find ourselves craving some excitement.

Looking for thrills
It's more of the same when we change styles, with Kanye West's Stronger merrily highlighting the agility, pace and precision of the Creek's delivery.

The bottom end is pert and powerful, while the treble is clear and communicative and packs in plenty of character and emotion - but there's a distinct lack of thrill. This means we're less inclined to listen on, in spite of the Creek's otherwise effective performance.

So, while it's clear plenty has changed on the outside, with a reassuring solidity to the external workmanship, the inside remains distinctly Creek.

There's an admirable neutrality to the tonal balance, agility with fast action and that overall smoothness, but it's at the expense of a little vitality and drive. While we like knowing the Creek will never set our teeth on edge, we'd like it more if it took the odd extra risk.