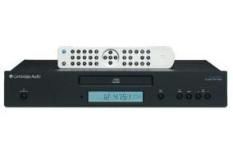 Thrillingly engaged and engaging player that will frighten the wallflowers, but stir everyone else.

It's fair to say we've been around the old hi-fi block a few times. And if there's one thing we've learned in the past few years, it's that Cambridge Audio's Azur range can be relied upon to offer uncommon value for money.

In terms of build and pride of ownership, as well as the all-important issue of sound quality, Azurs have proved damnably difficult to beat – and that turns out to be true even where a £150 CD player is concerned.

Sturdy and smooth
Out of the box and on your kit rack, the 340C looks and feels a fair bit more expensive than it is.

The stout slice of metal that forms the fascia is complemented by the chunky remote control, specification is up to snuff and the disc tray slides smoothly and silently – we've reviewed CD players at 10 times the price that don't feel as sturdily screwed together. Only the ‘big print for the hard of seeing' display, which is none too visible away from the dead-ahead, somewhat spoils the aesthetic.

Fundamentally, though, the 340C is a thoroughly engrossing music-maker. Playing Neil Young's Silver and Gold, the Cambridge proffers a spirited, poised sound that's just the right side of strident. The typically approximate vocal is eloquent and expressive, and there's a good grasp of pacing and rhythm – the song lopes along easily.

There's a degree of spaciousness in the 340C's presentation, too, making individual musical paths nice and easy to follow.

The rather more assertive Soul Desert by Can displays more of the Cambridge's strengths, as well as highlighting some slight weaknesses. It's an up-front listen, the 340C, and it powers through the dense tune with determination and fine dynamic heft, handling the tricky tempo with confidence.

There's an undeniable shortage of fine detail in the sound, though – the Azur seems a little too caught up in the ferment to be bothered with the minutiae.

In-yer-face performer
In short, this is not a player for the faint-hearted. When the music gets particularly complex, the 340C's overriding sonic signature – candid, in-yer-face and enthusiastic – can suggest that every instrument is playing louder than every other instrument. The result is a slight but unwelcome hint of two-dimensionality.

The vast majority of the time, however, the Azur distinguishes itself as another in an illustrious line of profoundly impressive Cambridge Audio CD players. It's not going to dish as much detail as its rivals, but you're certainly not going to go short of excitement either.