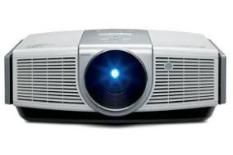 It's a shame this isn't cheaper: a fine projector if you're prepared to pay a premium for Full HD

It's not often that a BenQ projector finds itself at the top of the price pile in a Group Test. But, fortunately for the BenQ, it has a few tricks up its sleeve.

Most notably, this is a Full HD projector. While the jury is out on the value of those extra pixels on TVs, especially at 32-37in screen size, when it comes to projecting a 7ft image, we think a 1920 x 1080 resolution might carry a little more weight.

Talking of weight, this is a bulky unit. Though, it's what's inside, and the picture it produces, that matter.

Again, this projector is fairly easy to set up, with a decent, relatively large remote control that sports what we think is a quite crucial component - a backlight.

Though it's worth pointing out that the projector has a long-throw lens, so it's not suited to providing a big image in a small room.

Deep blacks, smooth action
We fire up our first video content, noting as we do that the fan is nice and quiet, and... we're mightily impressed.

As we watch the Blu-ray version of Ghost Rider, we fall silent and simply start watching the film - a sure sign that the image is a good one. Most striking is the three-dimensionality and depth of field that this BenQ is capable of delivering.

Furthermore, not only is the colour striking, the black levels deep and dark, and fast motion handled smoothly, but the detail picked up in the distance is second to none here.

Similarly, watching the BD of Casino Royale (it's been a while, after all), the picture is staggeringly crisp and sharp for a projector of this price.

Bright scenes are bright, dark scenes are dark but detailed, and all the time there's little sign of instability.

BenQ clearly hasn't scrimped on the scaler either, the W5000 delivering high-quality DVD images, with the positives still apparent.

So why the four stars? Well, it's nearly twice as expensive as the Panasonic PT-AX200E, and the performance gap isn't that big.

If you can't look past Full HD - we'd think maybe you should - and don't mind paying a premium, then you could do a lot worse than investigate this bulky beauty.