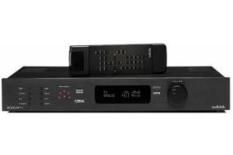 If an involving all-round sound is your priority, give these a listen pronto. However, the mean spec seems too much of a compromise

We tested the forerunner to Audiolab 8000AP/8000X7 processor/power amplifier combination in our Awards 2006 issue, and found it to be a seductive listen hamstrung by a lack of modern audio- and picture-processing facilities.

Some 18 months later, Audiolab has tried to address some of our concerns, but that long a timespan is an eternity in modern home cinema terms – just ask HD DVD manufacturers. So are the changes timely, or too little, too late?

It's the 8000AP processor that's got the new toys here. The arrival of audio-capable HDMI switching (two in, one out) is obviously the most welcome improvement over the outgoing 8000AV. That, however, is your lot – and that's an issue in the modern market.

Found wanting for features
More crucially, though, the 8000AV lacks HD audio decoding. Sure, it'll take PCM audio from your Blu-ray or HD DVD player, and yes, you can instruct said player to convert every form of sound stored on your discs into a PCM signal that the Audiolab can understand – but wouldn't you rather be able to listen to your discs' soundtracks in their unconverted form?

We're also aghast that, no matter which player we teamed it with, it wasn't able to to switch a 1080p/24fps high-def picture to our reference Pioneer screen.

This Audiolab kit still has its appeal if you've room for only one system. However, if you buy this processor with the matching 8000X7 multichannel power amp, then we can't help thinking £2500 should buy more modernity than it can muster.