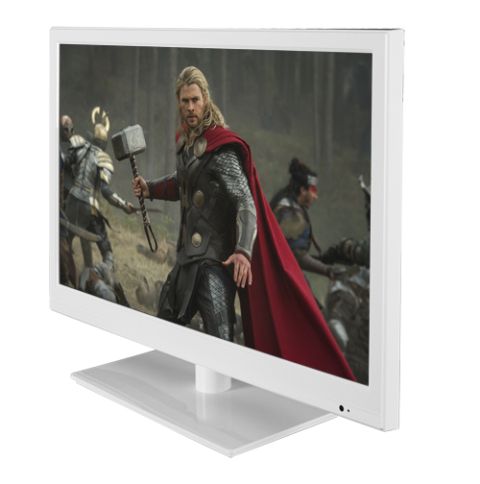 A capable TV if your priority is discs, but there are better options for broadcast TV

It’s not very often that we get to test a TV from Alba. This is the third one we’ve tested in five years, and the last one wasn’t particularly stunning.

We’re pleased, then, that this one is rather better.

Not that you could tell at first glance. The Alba AMKDVD22W (Argos calls it the ‘Alba 22 Inch Full HD 1080p LED TV/DVD Combi’) is plain to the point of looking unfinished. There’s no branding, for example, on the frame or the remote control.

Aside from a sticker on the back, there’s no attempt to differentiate it from countless other sets coming out of China. It does come in six colours, though, ranging from black to bright red.

It’s the performance that really matters, and we’re willing to forgive a lack of varnish if there’s a good performance to balance things out. And that’s exactly the case here.

After optimising the picture with our trusty THX disc – a not entirely pleasant process due to a cluttered remote control with identical buttons – we get stuck in with a Blu-ray of Iron Man 3.

It’s an impressively clean picture with plenty of detail. Contrast is strong, making the most of solid blacks and bold colours. It never gets too much, though: there’s a decent level of subtlety.

We move down in resolution and switch to a DVD of March Of The Penguins, and it’s still a fine picture. This disc is a tough test with plenty of bright whites and deep blacks, but the Alba manages to convey a good amount of texture in dark and light sections alike.

There’s also a nice crispness to everything: cracks in glaciers are clearly defined, but not so much that it looks over-etched.

While we’re on this disc, let’s take a moment to talk about Morgan Freeman. His mellifluous tones sound noticeably thin and light – the Alba is par for the flatscreen course, then, lacking a sense of weight and substance. Still, it doesn’t sound as harsh as some rivals.

The Alba has a built-in DVD player. It’s a good one, with similar traits to what we’ve seen so far, but the picture is not as crisp and clean as with a dedicated disc spinner. A word of warning: be sure to switch to DVD mode before you load your disc.

The Alba doesn’t act like some TV/DVD combi units where inserting a disc automatically kicks the TV into disc mode. Try to feed it a disc when it’s not ‘ready’ and you risk ending with scratches.

Time to play with the Freeview (non HD) tuner, and the Alba trips up with an episode of Storage Hunters. It’s a washed-out picture as people play in abandoned garages, and no amount of settings fiddling could get the blacks to stop looking grey.

There’s not much noise, at least, and the decent level of sharpness remains.

The Alba does very well in a lot of areas, but we have to dock it a star for that less-than-perfect TV tuner. It's good, if not the best in class, but still worth considering at such a a bargain price. If you watch a lot of DVDs, take a look.