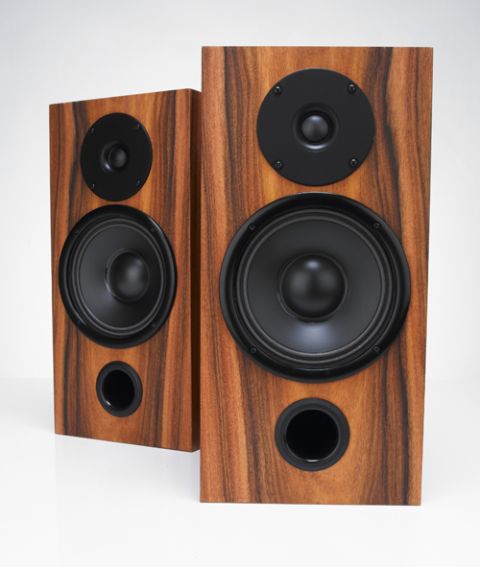 There are things to like about Alacrity Audio’s Caterthun Classic speakers, but we’re not convinced.

On the plus side, the Caterthun Classic standmounters have an exciting presentation that can impress with the right recordings – particularly when there’s loads of bass involved.

Give Massive Attack’s Atlas Air a spin and these speakers are in their element. Once mounted on solid stands close to a rear wall, they sound agile, and dig up a fair bit of detail in the process.

The music’s dynamic shifts are delivered with conviction, and vocals are pleasingly articulate. But it’s in the bass that these speakers really shine. The song’s layered low-frequencies are rendered with pleasing clarity and a surprising amount of depth for a speaker that stands just 42cm high and has a 17cm mid/bass unit.

Alacrity Audio uses a cabinet-loading technique called Acoustic Induction. It’s not something we’ve come across before, but Alacrity claims it has all sorts of benefits, from making the cabinet more consistent in how it behaves across the frequency spectrum through to improving bass and flattening the speaker’s impedance curve.

Other gains for the technology are claimed to be an innate phase shift that counters that produced by the crossover, and the use of non time-aligned drive units.

It all seems impressive, and there are certainly aspects of the Caterthun Classic’s sound that are unusual for this size of speaker – that deep bass performance for starters.

For all that they do well, these standmounters aren’t convincing all-rounders. Their treble may be open but it also sounds brash and overly enthusiastic to us. Any recordings that are a touch lively in the treble will result in a harsh sound that, on occasion, had us wincing.

Move down the frequency range and we like the midrange, but along with the well-extended bass it lacks punch and solidity. The sense of power and the rhythmic drive of music such as Nirvana’s Nevermind are notably reduced. There’s also a distinct lack of composure when the music becomes complex.

Just to prove the point we dig out a pair of ATC SCM11speakers, which are half the price. Connected to our reference system – we used our usual Naim NDS/555ps streamer as source with the Bryston BP26/4B SST2 pre/power together with Roksan Caspian M2 providing a price compatible amplification - the SCM 11s sound more capable.

They may not have the openness or bass extension of these Alacrity Audio speakers, but in just about every other area the ATCs sound more balanced and convincing. With the SCM11s there’s plenty of attack, but it’s combined with fluid dynamics, stable rhythmic timing and superior refinement.

Move away from sound and the Caterthun Classics remain uneven. In our opinion there’s nothing wrong with the solidity of the cabinet, but the finish on the veneer isn’t flawless. There just isn’t the slickness of finish or polished cosmetics of similarly priced alternatives from the likes of PMC, ATC or Spendor.

The Caterthun Classics can impress, but their patchy sonic ability combined with the lack of polish when it comes to finish means they’re speakers we can’t get behind.

That £2000 price tag looks way too hefty for us when applied to such an inconsistent product.