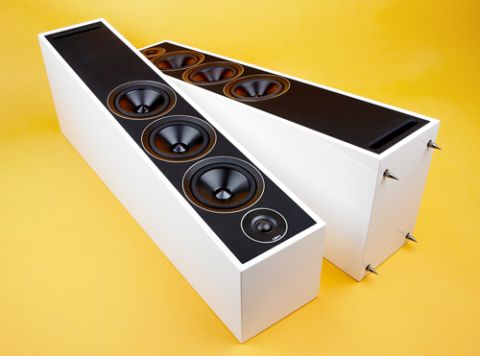 Despite a number of strengths, the AE 305s are not punchy enough

The Acoustic Energy 305s are the floorstanders in the company’s midrange 3-Series that brought us the brilliant 301 standmounters, which we awarded five stars.

First impressions are good. We like the look of the AE 305s. The design is refreshing and more eye-catching than the typical square-edged cabinet, yet the minimalist approach is subtle enough not to look silly.

Build quality is impressive: solid and sturdy, with a high-gloss black or white finish that looks and feels every bit as premium as pricier speakers.

The front has an angled baffle, free of holes thanks to the magnetic speaker grilles.

There’s a 28mm fabric-dome tweeter and three 11cm aluminium cones (one for midrange and two for bass).

Around the back you will find a single pair of terminals, so there’s no biwiring. Despite a pleasing introduction, we find ourselves somewhat disappointed once we get down to business.

The 305s need better timing and greater dynamic punch. They don’t hit quite when they should, nor as hard as they should.

The result is a lack of enthusiasm, which undermines the entire performance. It’s a shame, because the AE 305s have some very strong points and are agile.

Whatever we throw at them, there is a precision to the way they start and stop, helping to give the sound clarity.

We like the amount of detail from the 305s: it means that instruments and vocals are textured and easily identified. They are also easily placed on the broad soundstage, which is well organised.

There’s impressive control, even at higher volumes. Crank it up and the sound never becomes harsh. Tonally, it’s a balanced performance, with no undue emphasis on any part of the frequency range.

The bass should also be applauded for its depth: there’s not too much of it, but it’s enough to have a decent stab at Nick Cave’s We No Who U R.

We’re also impressed by the seamless integration between frequencies, as well as the sense of cohesion. However, we can’t get past the restrained dynamics and timing. We keep wishing for a tighter sound.

No matter what we listen to, the music never feels particularly engaging. The AE 305s never seem to try very hard at getting your feet tapping, and performers sound almost bored.

Ultimately, though, there’s little you can do to change the overall performance of the AE 305s.

They look lovely, but similar money can get you a more entertaining sound elsewhere.