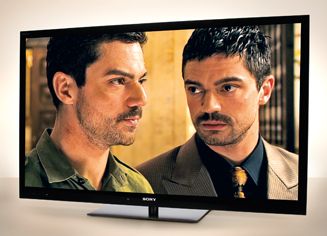 Features and motion-handling to die for. Good, but not necessarily great image quality

Sony’s KDL-55HX823 is billed as a premium 3D-enabled screen, so the fact it comes with no 3D glasses seems to be taking the mickey a bit. That faux pas apart, the Sony is a talented and hugely desirable TV.

Its styling is dramatic and purposeful, and Sony’s OptiContrast panel has been designed to help minimise the effects of glare on the screen.

The front of the set comprises a sheet of toughened, scratch-resistant Gorilla glass, similar to that used on consumer electronics such as the iPhone 4. It spreads from corner to corner, leaving only the slimmest of bezels running around the edge.

Motionflow bids bye-bye to Bravia
Sony’s X-Reality PRO engine replaces the Bravia Engine which has served so many Sonys so well over the years.

It introduces new Motionflow XR 400 processing (which still effectively operates at 200Hz), and various noise reduction technologies, including variants for watching online content streamed from the likes of You Tube and BBC iPlayer.

The sum of all these parts is a very impressive 2D picture. During the Blu-ray of X Men: The Last Stand, there’s real depth and darkness to the night sky and the darker recesses of the forest.

The black detail isn’t quite up to the standards of the latest Panasonic plasma sets, however, and there isn’t quite the same level of punch delivered from the moonlight above.

Fine motion handling
Edge definintion, though, is spectacular throughout. The Sony shows a steady hand and razor-sharp precision when drawing and highlighting fine lines and subtle details.

It also helps that the 55HX823 boasts fine motion-handling. With Motionflow set to standard, there isn’t a horizontal, vertical or diagonal movement that the Sony can’t grasp.

Images appear clear and composed when you make the switch to DVD, while even an episode of Eastenders streamed through BBC iPlayer gives a very watchable picture.

Off-air, the Freeview HD tuner presents stable, relatively noise-free images. HD channels show the Sony at its finest, presenting you with natural, smooth images in the same ball-park as the best TVs in this class.

Better 3D glasses
Sony’s latest 3D glasses (TDG-BR250), are lighter and more comfortable than last year’s. Sony claims they work better with the screen to reduce the effects of crosstalk – and we tend to agree.

The 3D image can still lose focus when you tilt your head, so you need to keep your head relatively still, but watch Despicable Me and as Gru takes off for the moon there’s a real sense of drama and depth to the picture.

The nose of the space shuttle appears to extend out of the screen, to poke around your living room.

The TV speakers are perfectly listenable, despite sounding a little thick and indistinct. We’d take this over tinny and thin-sounding any day, as it’s far less offensive to our ears.

This Sony is a very accomplished TV, but the lack of 3D glasses in the box is annoying and it doesn’t quite have the all-round appeal of its nearest rivals.