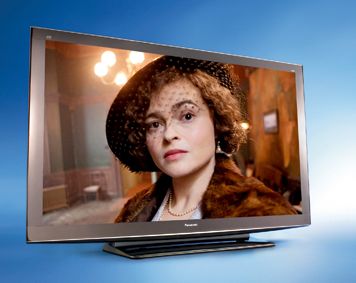 In a genre full of monsters, this is a mega monster. At over a metre tall on its stand and more than a metre-and-a-half wide, this Panasonic TX-P65VT20 is significantly bigger than comparable 65 inchers, and apart from giving it a slightly bronze finish, Panasonic has done little to disguise its girth.

3D glasses, but no wi-fi dongle
As you’d expect from Panasonic, this is a plasma and, like the rest of the 3D Viera range, it comes with two pairs of active-shutter glasses.

Specification is largely as you’d want: four HDMIs, two USB sockets, an SD card slot, and an ethernet socket so you can connect to the VieraCast web portal. These days, that contains YouTube, Acetrax, Skype and Twitter, but still not BBC iPlayer.

While we’re on the subject of what’s missing, we have to bring up wi-fi. This is far from the only TV that requires you to purchase a separate wi-fi dongle, but you’d think it would be included in the box of a set costing more than four grand.

Picture is easy on the eye
This plasma produces a picture that’s very easy on the eye. The difference between it and others sets is that it’s also more three-dimensional.

A couple of sets are sharper, but the Panasonic’s combination of detail, enveloping depth and brilliant stability makes it our first choice for 3D content.

We tried Avatar in 3D on this behemoth, and as Jake emerges from the cryo pod, approaching Pandora for the first time, the VT20 produces a picture that’s spectacularly deep and immersive; yet it also shows serious control when rendering the difficult patterns of the spaceship’s internal structure, with which some sets struggle.

Some other sets are a touch crisper and sometimes have a better grip on fast, unpredictable motion (and the Panasonic’s 3D glasses seem to sacrifice a bit of vibrancy), but it’s all forgivable.

Switch to 2D test-favourite Harry Potter and the Order of the Phoenix, though, and the VT20 proves it is perfectly solid with the challenging vertical and horizontal pans of the opening scene.

The contrast levels are the same here as they are with 3D, but they’re slightly further up the spectrum, resulting in a punchier, more vibrant image, albeit with slightly lighter blacks.

Freeview HD and Freesat tuners
This punch combines with vivid colours to create a fine DVD picture. The Panasonic’s calm, controlled and natural presentation is impressive, especially at this monstrous screen size.

You get Freeview HD and Freesat tuners; both are vibrant and clean. The Freesat tuner is just slightly sharper, but there’s not a great deal in it.

If you’re buying a TV at this sort of size, we’d recommend a dedicated sound system; you’re likely to find the rather flat and heavy audio quite disappointing.

This Panasonic has some flaws, then – but nothing serious. And its overall high quality – and size – puts it in serious contention for the top spot in this genre.