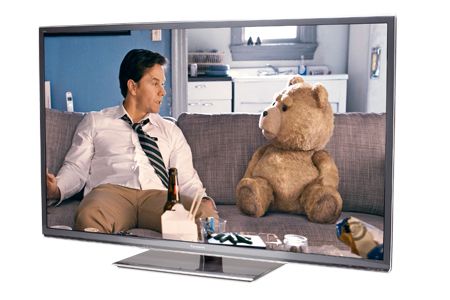 Best 60in+ TV, Awards 2012. Superb value for money, this is a monstrous set that produces a premium picture with standard- and high-definition content

Extra inches get exponentially more expensive once you set your sights on a screen upwards of 50 inches. We took a look at an 85in professional model from Panasonic last year, which cost more than the average house in certain parts of the UK.

So for those who don't have money to burn, the 65in Panasonic TX-P65ST50 is much more like it, weighing in cheaper than plenty of 50in TVs, let alone screens this big.

Panasonic does only two sets at this 65in size. The top-of-the-range TX-P65VT50 and this ST50 version. The ST50 sits beneath the VT50 and GT50 ranges – the latter of which is available only in 42in and 50in sizes – but, as we’ve all become accustomed to in the past couple of years, the 'lower' specified Panasonic range still packs in an inordinate amount of serious tech.

Despite the huge dimensions of the screen, the ST50 remains staggeringly slim and easy on the eye. The screen itself is 52mm in depth without the stand, only a few millimetres larger than the top-of-the-range Panasonic flagship sets.

It has the 'crystal frame' – rather than the admittedly rather cool, one-sheet-of-glass finish of the VT50.

But this is no criiticism of the ST50: the bezel is brilliantly slim and does its very best to keep the overall heft to a (still whopping) 1508mm across.

As we mentioned earlier, this is no stripped-out budget model. There are three HDMI inputs rather than the four you’ll find further up the range, and two USB inputs rather than three, but with integrated wireless, an SD card slot and digital and analogue audio outputs, we’d be amazed if you think it’s missing anything.

The Infinite Black Pro panel is the same as the GT50's (the VT50 has an 'Infinite Black Ultra screen'), but you’ll have to settle for a 2000Hz 'focused field drive’ rather than the 2500Hz seen higher up the range.

The wireless integration makes it even easier to get on to the Viera Connect suite of internet content – a big ‘Internet’ button on the remote makes it easier still – where apps from Acetrax, BBC iPlayer, BBC News, Facebook, Netflix, Twitter and YouTube are the highlights.

Thanks to DLNA certification you can easily access photos, music, videos and more over your home network as well. As you can see, there’s little sign of scrimping where features are concerned.

Panasonic’s on-screen interface has had no more than subtle updates over the years, so it remains pretty simple to get your head around. The simplistic layout is due an overhaul, but for us, it's neat compared with the (sometimes) busy offerings of rivals.

Like the interface, the remote control has seen subtle evolution rather than revolution. Again, however, it works well. The black gloss finish and buttons are neat, and fast keys for smart TV content and connected media are handy too.

There’s no voice or gesture control here, so you don’t get the Viera Touchpad Controller as a second remote control. With the technology at its formative stage, we don’t think this is a massive loss, and it no doubt helps to keep the price down.

If you do want to get a little cleverer when it comes to controlling your TV, the Panasonic Viera Remote app works absolutely fine with this model.

A free app for Android or iOS, it lets you not only take full control of your TV, but also flick content, web addresses and more between the connected devices sitting on your home network.

We tune in the Freeview HD tuner and are soon marvelling at those trademark deep black levels. Since the end of Pioneer’s plasmas – and their famous black levels – Panasonic has become the new champion of insightful, accurate black shades, and this is another fine example.

Off-air broadcasts are largely free of noise and handle motion smoothly, while bright colours look good, especially set against those black levels. Crucially, it does well with standard definition content as well as with HD pictures.

The Woman In Black, on DVD, predictably plays to the strengths of the ST50, with gloomy scenes and a generally subdued colour palette – it’s clear the ST50 has a decent on-board upscaler.

The jumps and dynamic crescendos of the soundtrack are rather wasted by the lightweight sound from the set’s speakers, though.

The glorious Blu-ray release of Chariots of Fire provides something different, with clean whites, bright colours and some tricky motion, and the ST50 is largely unfazed by it all. There are hints of picture noise at times, and none of the motion processing settings strikes us as entirely perfect, but it’s largely a very enjoyable big-screen picture.

With good quality pictures from iPlayer and solid, subtle 3D performance, the TX-P65ST50 proves a quality all-rounder, which at this sort of money – and for this sort of size – is something truly worth shouting about. Panasonic’s fine form continues.