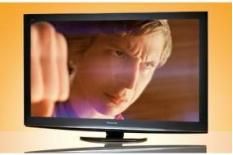 It's far from a problem to be pinned on Panasonic's door alone, but this TV is a good example of the marketers at work.

For this is one of the company's new NeoPDP plasma screens; while that does indicate a new panel and some genuine changes to its make-up, it remains for all intents and purposes a plasma TV – but with a shiny new name.

The NeoPDP also has the ‘Infinite Black Pro' badge of approval. Well-earned we're sure, but it's no surprise to see worried punters contemplating the difference between this and Panasonic's – more amateur? – ‘Infinite Black'.

The same can be said of ‘600Hz Sub-field Drive Intelligent Frame Creation Pro'. Far from being ‘three times better than 200Hz' as you might think, it is, rather, merely Panasonic's latest motion processing tool.

This is an expensive set, and it inspires confidence out of the box. The brushed aluminium effect is easy on the eye, while the pedestal stand's construction is rigid and sturdy.

This set's extra features are a little underwhelming compared with the Samsung PS50C6900. There's no 3D support and the VieraCast streaming feature is confined to Acetrax video-on-demand, YouTube, Picasa and a weather app.

There is, though, DLNA connectivity for streaming content, and with USB and SD card inputs you have plenty of connectivity bases covered.

We're not convinced of the merits of the new Robin Hood film, but there's no arguing with the quality of the transfer, and the Panasonic 'V20 does wonders with the natural colour palette.

Pictures just look right on this TV, with realistic colours and landscapes given a real sense of depth thanks to high levels of insight. Skin tones are spot on too, with plenty of texture given to the expertly balanced hues.

Darker scenes find the Panasonic rising to the challenge in style once more, with deep, detailed black levels. There is, though, a trade-off with a touch of noise in blocks of dark colour.

HD on Freesat is a winner
Switch to off-air TV broadcasts and the higher bandwidth afforded by Freesat sees a slightly sharper, cleaner high-definition image compared with the Freeview HD tuner, which is pipped by other comparable sets.

Sound lacks a little body and clarity, but there's decent detail and punch for a flatscreen, though there's still no Dolby Digital 5.1 output from the TV's digital optical output with Freeview HD.

If top-notch black levels and an unrivalled realism thanks to natural colours and fine detail sound good to you – with the bonus of two integrated HD tuners – this is a fine set.