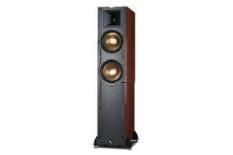 A big, boisterous speaker that needs to show a bit more restraint to compete with the class-leaders

There's no doubting that you get plenty for your money with Klipsch's RF-82 floorstanders.

Each 30kg tower measures 111cm tall and 41cm deep, and once up and running they hit you with an immensely robust sound. Those 8in copper-coloured Cerametallic woofers generate a huge amount of bass weight, so they need much room to breathe if the lows aren't to overpower the presentation.

The more dynamic tracks on The Dark Knight OST, such as Like A Dog Chasing Cars, hit you with the force of a head-on collision with Batman's Tumbler.

This spirited delivery will liven up even the dullest of listening rooms. The speakers unearth much detail and the horn-loaded tweeter ensures high frequencies have as much of an impact as those lower down the range.

Slight hardness in vocals
It's a shame then, that the RF-82s have chinks in their armour. Those sizeable bass notes lack definition and tautness.

The subtle shifts in tone during Lilly Allen's It's Not Fair aren't quite as apparent when listening through the RF-82s as they are when heard through the class-leaders at this price.

The same track also exposes colouration and brightness in the midrange and treble. Where the best rivals have no qualms reproducing Allen's sweet-sounding vocals, the RF-82s replace the purity of her voice with a distracting hardness.

The RF-82s' muscular showing will undoubtedly impress during a short listen, but over time you'll be craving the kind of subtlety and refinement that can be gained elsewhere at this price.