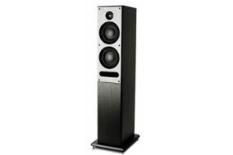 KEF has produced some stonking £400 floorstanders. These aren’t them

You might be forgiven for thinking that there are two companies called KEF operating right now.

We're not actually suggesting that KEF can't be bothered, you understand, just trying to articulate our mystification. Compare any of KEF's (many) well-regarded products to these overpriced, underperforming units and we're sure you'll feel as confused as we do.

In terms of perceived build, quality of materials and standard of finish, these C5s lag some way behind KEF's identically priced (and far more accomplished) iQ5SEs that we've enjoyed as recently as our October 2008 issue.

The C5s' sound is equally unpolished. From the complexity of Radiohead's Bodysnatchers to the high-sheen good taste of Paul Simon's Rene & Georgette Magritte With Their Dog After The War, they come up short where refinement, precision and dynamics are concerned.

That metal-dome tweeter is a blunt instrument that's short on detail, and the two 13cm drivers below it fail to invest voices (or the rest of the midrange, for that matter) with any character or animation – never has Thom Yorke sounded so matter-of-fact.

We could talk at length about the C5s' lack of outright dynamic heft, or their rudimentary grasp of timing, but you get the point. Don't spend £400 on the C5s – try to find some KEF iQ5SEs instead.