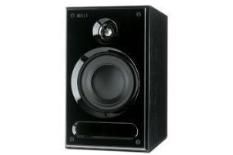 Given KEF’s track record, we expected much better – these C3s are a real disappointment

We have to say we're disappointed. KEF has such a great tradition of building top-class speakers that when it produces a poor one it's a bit of a shock.

But, make no mistake the C3s are poor. They cost £180, but have the air of something that costs only half as much. Up against top class (and similarly priced) rivals from the likes of Monitor Audio and Dali they look out of their league. Take a listen and that's how they sound, too.

Dynamics, detail, finesse – you name it and the C3s fall far short of the high fliers at this price point. They even struggle against far cheaper contenders like Tannoy's £110 F1 Customs.

That's not how things start, however. Initial listening suggests a rather better outcome: these are bold-sounding speakers with a direct and lively presentation.

It turns out the presentation is a bit too lively, due to a metal dome tweeter that can't quite get a handle on refinement and insight. Instead, it produces a mono-tonal sound and not a lot of fine detail.

Voices lack purity
Things don't get much better down the frequency range. Voices lack purity and suffer from a lack of projection, making even distinctive voices like Van Morrison's sound barely recognisable.

Relatively weighty low frequencies (helped by the front-firing rectangular port) aren't precise either: complex basslines such as those from Massive Attack's Teardrop become a blur.

Add vague timing and inexpressive dynamics into the mix and there's more disappointment. Sure, the C3s are unfussy about positioning – they even come with an integrated wall mount plate – and they go fairly loud. But at this price level doing those things well just isn't good enough.

The best in this class are truly musical and draw the listener into the music with ease. These KEFs don't even come close.