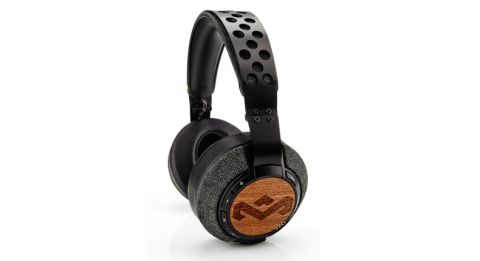 House Of Marley’s Liberate XLBTs allow you to go wireless and help save the planet at the same time.

The inserts for each earpiece use wood approved by the FSC (Forest Stewardship Council), while the headband, earpieces and carry pouch all use ‘REWIND’, the company’s own fabric, blended from reclaimed hemp, organic cotton and fibres from recycled plastic bottles.

Unfortunately, any feeling of satisfaction disappears from the moment you power them up and play music. They’re hugely disappointing. Small scale and compressed, the Liberate XLBTs seem afraid to put their head above the parapet.

Stream Sam Smith’s Money On My Mind, and the normally sprightly piano play lacks any real get-up-and-go. Percussion sounds sombre instead of sparkly. The whole track is delivered like it’s wrapped in cotton wool. Bass notes sound loose and ill defined – and there’s a haze to the sound, which robs it of any clarity.

Play Feeder’s Fires and the track sounds even more compressed than the ‘Extreme Quality’ Spotify stream; like the band’s playing inside a wardrobe. Detail levels have gone AWOL and the track’s missing any sort of cutting edge.

It’s a shame, because the XLBTs are reasonably well made and comfortable. The earcups are hinged so they can fold away, but they can’t rotate which means they aren’t quite as flexible as some rivals.

This doesn’t hold them back though: the fit isn’t overly tight and the Marleys didn’t overheat our ears over prolonged listening. The big aluminium headband looks industrial, but they don’t resemble scaffolding on your head.Nice touches include the battery indicator, where four pinpricks of light indicate how much life is left in the cans.

If you need to switch to using them wired, the supplied cable also has a mic and one-button control for answering calls. Playback and volume are changed by using simple, plastic rocker buttons – they’re okay, but it would be nice to have some way of differentiating between the two sets; they’re virtually identical in size and shape and sit very close together.

But the real issue with the Marleys (as you’ve probably guessed by now) is the exceptionally poor sound quality. It doesn’t really matter how decent the fit is, if you don’t want to listen to music through them.