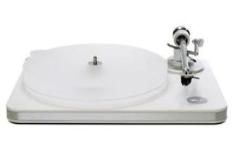 Still up there with the best, the Performance doesn’t fade with time

We last looked at the Performance back in late 2007 – and indeed, liked it so much we voted it an Award winner.

If you're into aesthetics, this turntable will catch your eye in a major way – it's stylish and sleek, with a milky white finish covering a satisfyingly damped Staron (artificial stone) and aluminium dense fibreboard plinth.

Yet for all its handsomeness, the real heart of the Performance lies in its ceramic/magnetic bearing. This little device uses opposed magnetic fields to remove any frictional contact between bearing shells, therefore making the platter ‘float'. Impressive this may sound, but it's doubly so when you consider that the process creates virtually no noise, and that this translates on to the sound produced.

Hidden neatly away at the side of the Performance is the motor, a separate unit that fits into a cut-out in the plinth and drives the belt. The theory here is that it reduces degradation of the sound caused by excess vibration.

Again, it's hard not to be impressed – our only slight gripe being that the motor housing could do with being a bit wider in the base, as it's easy to knock when turning the unit on or off.

Detailed sound that satisfies
The Performance comes with the tonearm, and the whole set-up benefits from its lightweight carbon-fibre construction, precision sapphire/ceramic bearing and one-piece wiring that reduces signal loss. The cartridge – also included –is the brand's wooden-bodied Maestro.

We gave the turntable some real stick – starting with the complex Straight Street by John Coltrane. Immediately you notice the level of detail on display, especially in the treble range. The cymbals crackle, the saxophone reaches out to you, and the bass is well defined.

In essence, you're listening to exactly what is cut into the grooves – something that the magnetic bearing helps to showcase. Close your eyes and you could be back in 1950s New York.

Put on something mellow with close harmonies such as The Beatles' Yes It Is and this turntable's attention to detail shines through – its ability to spotlight individual instrumental and vocal performances really is its strong point.

So, are there any quibbles? Yes, but much like the motor housing, they're tiny ones. The turntable's midrange may be transparent but it isn't projected as strongly as we'd like. A fuller bodied presentation would be nice, too.

Cohesion too sometimes feels competent, but no more – with its analytical ability, this deck doesn't pay full attention to the coherent glue that holds the performance together. To some, this wouldn't be of much importance, but to others this lack of cohesion might niggle.

But as we've stressed, these are no more than minor grumbles. A Performance? Absolutely, in every sense of the word.