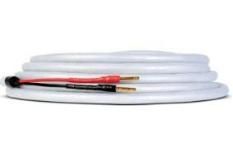 Chord's Carnival SilverScreen has been an Awards staple around these parts for years. But now newer, equally capable rivals are waiting in the wings… is it time for the Chord to stand aside?

Everything we've loved about the Chord is, obviously still there: its open and detailed presentation remains impressive.

But it's no longer the lastword in organisation or transparency. That's why we have to drop this champ down to four stars.

Let's make one thing clear, though: this is still a fine cable. If you like your sound a little piquant, then don't hesitate to go for the Chord.

In recent years, any new speaker cable at this price level has gone through the same test process: it comes in; we compare it to QED's Silver Anniversary; the new cable loses. QED has dominated this price class for more years than we care to remember. Only Chord, on the odd occasion, has managed to claim performance leadership, though once that happens, QED tends to get all upset and raise the bar again.

Well, it looks very much as if QED will have to get its thinking hat on once again because, with this Carnival SilverScreen cable, Chord has come up with a gem. Or should that be solid gold?

Rather than being a simple development of the much-liked Carnival Silver, the SilverScreen is more akin to Chord's upmarket Epic and Signature cables, using similar shielding technology. Chord has decided to revert to high-purity copper as the cable's conductor rather than the silver-plated variety of its direct predecessor. The result is a detailed and authoritative cable that has the refinement and dynamics to work well in a wide range of systems.

Add a remarkably cohesive presentation – where no part of the frequency range stands out – and impressive timing into the mix and you have what is a truly standout cable for the money.

Should the boffins at QED worry? Yes, undoubtedly.

Click here to watch our video review of the Chord arnival SilverScreen.