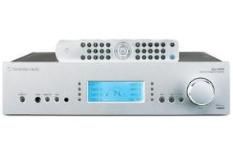 Rival makers will sit up and take notice – there’s much to admire here. There’s a little to admonish though, too

Cambridge Audio has built stacks of great-sounding budget-conscious kit, and its Azur range has set sky-high standards in the sub-£300 stereo separates arena. The 840A represents the leading edge of an up-market Azur range that takes the firm into a whole new fight. Over £700 is a substantial price to consider spending on equipment from a company with negligible experience in this sector of the market; there are more than a few extremely effective amplifiers to be had for this kind of cash. So does Cambridge Audio have what it takes to move into a scrap with the big-hitting specialists?

If what it takes is a bold, blank-page approach to construction and engineering, then the answer is a resounding ‘yes'. For example, some of the fundamentals of the 840A's amplifier topology are patent pending. ‘Class XD' is claimed to eliminate crossover distortion at low signal levels, and Cambridge hasn't left it there: the 840A can form the hub of a simple multi-room system and features balanced inputs and a monster power supply.

Each input can be customised for gain and source name via the LCD display. Chunky, rigid build and nicely-judged controls (both integrated and remote) don't harm its case, either. Office opinion may be divided as to the 840A's actual appearance, but it's no ugly sister alongside its obvious rivals.

Bright out of the box
Straight from the box, the Cambridge sounds bright and aggressive. After a day's warming, the sound calms to merely brash and, at the end of a second day, the 840A has gained equilibrium. A run through Goldfrapp's Supernature reveals this to equate to a detailed, open, dynamic and expansive sound. Voices are quite superbly poised and natural, low frequencies punch solidly, and the soundstage is vivid, substantial and well-integrated.

The 840A's big biceps allow horn stabs to crunch and bite vibrantly, while bass notes (though slightly monotonal) drive with impressive body and control. If partnering kit is right, treble sounds are crisp and distinct, but with the wrong choice of electronics they can be unruly. Either way, the highest frequencies lack the transparency found elsewhere in the frequency range.

The 840A is not much of a fan of down-tempo music, either. Bob Marley's Turn Your Lights Down Low ought to lope along with heavy eyelids, but in the Cambridge Audio's hands it sounds lumpy, rather than laid-back. This over-caffeinated approach is the most significant flaw in a hugely impressive package, but its effect on certain tunes makes it impossible to overlook.

In several aspects, the 840A leads the field – in terms of vocal delivery, it leaves rivals standing – but it's not a true all-rounder. This is a great amp, but a slightly revised model would be even better.