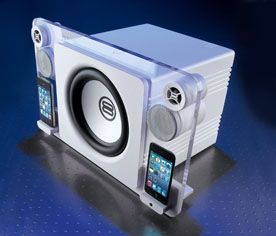 An innovative design and fine feature set from a new name

The Bayan 7 is the flagship model in a four-strong iPod speaker dock range from new company Bayan Audio.

OK, so it should come as no surprise to see new names in the speaker-dock market, one of the few serious growth areas in the consumer electronics industry, but Bayan's background is slightly unusual: it's a division of Radiopaq, which started life as a website for streaming internet radio and podcasts, but has branched out into physical products such as headphones.

As you may have gathered from the picture, the stand-out feature is the dual docks – well, alright, that and the big central bass driver. Twin connections for your iOS device are also available on the Bayan 5; Bayans 3 and 1 are smaller, and settle for just the one.

Bayan bills its docks as iPad- friendly; there's not room to dock your tablet, but a USB input at the rear of the unit, alongside a 3.5mm input, allows you to charge and play music from an iPad or any other tablet or smartphone with the appropriate cable.

In addition, the company soon plans to roll out an AirStream add-on, allowing wireless music streaming to all of its models.

Industrial look, powerful sound
The Bayan 7 is available in white or black. The looks are fairly ‘in your face’, but we like it. It feels solidly built too, while the remote control is a good size with clearly laid-out buttons, standing out from the crowd of off-the-shelf clones.

That said, ours seemed a little slow to respond, while the bass and treble controls are slightly confusing – the lack of display means you have to make adjustments blind; trust your ears.

Those twin docks are a bonus. Even if you don’t see the ability to hop between the two iPods’ music libraries as important, an extra dock to use as a charger will be welcome in plenty of households.

The design is dominated by the central 21cm bass driver, while each channel also gets a 5cm full-range driver and a 25mm tweeter. This little lot is driven by three channels of amplification Bayan claiming a total power or 120W, and bass extension down to 30W.

Behind that acrylic finish, available in black or white, is a main enclosure built from 12mm wood material, 'for strength and acoustic values'.

And it certainly sounds powerful. Big and bolshy, a bit like its looks, the Bayan 7 fills a decent sized room easily enough, going nice and loud without toughening up or distorting hugely.

There’s bags of bass and, while it can sound a little detached at times – maybe overbearing for some – we think it’s a lot of fun. M83's Midnight City is a busy, layered track, especially in the mid and upper-frequency ranges, but this dock stays in control, keeping an impressive level of clarity.

There’s no harshness to treble but still plenty of excitement and dynamics, helped by plenty of deep bass.

If you like it loud and proud, with lashing of bass, and have a few iDevices, this could be for you.