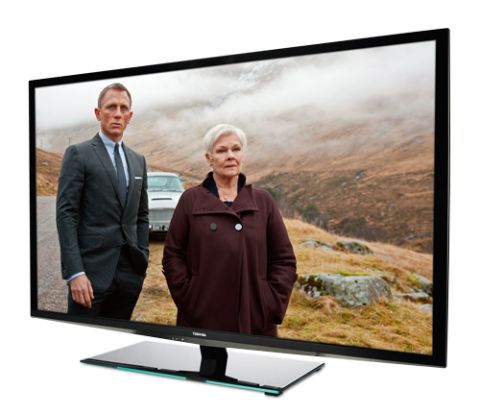 The WL Series is currently Toshiba’s flagship TV range, making this 55in monster pretty much the icing on the cake for the company’s TV line-up. OK, so the 55ZL2 glasses-free 4K Ultra HD set is the cherry on that icing, but back in the real world, the 55WL968 is top dog.

Toshiba 55WL968 review: Features
A full LED HD, passive 3D set, it has all the trappings you’d expect in a flagship model. A super-thin bezel and a slim chassis make sure it looks the part. It’s wi-fi-enabled out of the box, or you can connect via ethernet to stream content.

Toshiba Places is the name for the company’s smart content hub, recently redesigned. It looks much smarter now, plus it’s fast to browse and fairly intuitive. The remote control is quite chunky but feels good in the hand, though the buttons are a little cluttered at first glance.

Toshiba 55WL968 review: Performance
HD channels on the integrated Freeview tuner are bright and colourful, favouring a punchy colour palette. In isolation, edges are reasonably well defined and there’s decent levels of detail, but the best in class do better in both these areas. Motion can be a little slurred, too, with images losing stability in fast motion.

Naturally if you switch to SD channels you lose definition and sharpness, but the vivid feel of the picture remains, although lower-quality channels do look a little blocky and unstable trying to fill the screen.

Watching DVDs we pick up decent detail and sharpness to close-up shots, bold colours and skin tones that stay just on the right side of being over-saturated. Black levels let the side down however, lacking definition and depth in dark scenes.

Toshiba 55WL968 review: Backlight bleed
With Mission Impossible: Ghost Protocol, our eyes are also drawn to issues with the backlight around the edge of the screen, with spots of light bleeding into the picture.

Blu-ray is more enjoyable, pictures looking sharper and definition better, but there’s a level of detail missing compared with the best. Toshiba’s ClearScan technology does its best – we like it in Standard mode – but there’s still some juddering.

If you want to watch 3D then you’ll need to stump up for the glasses –at least being passive they’re much cheaper. Avatar 3D remains our go-to disc and while there’s plenty of depth, the 3D performance is let down by poor motion.

Toshiba 55WL968 review: Verdict
Toshiba has turned out some very good sets over the past year or so, but with the TV market as competitive as it is at the moment, the 55WL968B is no better than average at this price.