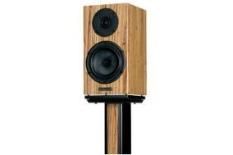 These Spendor SA1s are ideal for those who want a top-class standmount, but have limited space

We thought long and hard before including these Spendors in the Temptations section of the magazine. Flash finish apart – it's called Gloss Zebrano, in case you were wondering – there appears little here that would be considered out of the ordinary.

The type of kit that usually features in this section of the magazine is either extravagant looking, very pricey or both. In absolute terms, these standmounters are neither.

What makes the SA1s special is their performance, build quality and their unfussy nature. Let's tackle this final point first. Most rivals – even if they are as small – are designed to go out into the room, on top of a sturdy pair of stands.

These Spendors sound best in such a position too, particularly if you use their excellent dedicated stands. But, unlike most rivals, if you put the SA1s close to a rear wall, or even on a wall shelf, the magic doesn't disappear.

On to those dedicated stands. It's obvious Spendor has spent a great deal of time getting these right. They're a wooden design with damping built-in. They cost a whopping £400, too.

Judge them on performance, though, and they're worth every penny. Most rival designs sound closed in and mechanical in comparison, or more correctly, they make the speakers they're supporting sound that way.

Standing tall
The SA1's unfussy nature extends to partnering kit, too. By today's standards these speakers have a relatively low sensitivity, 85dB/W/m, which means you'll need plenty of power, at least 100 watts per channel, if high levels are your thing.

But if you have a small room, and let's face it, this is the kind of room small speakers would be bought for, these Spendors will be quite happy with more modestly powered amplification. While it's not a combination we would recommend, it was surprising just how accomplished Rotel's 40-watt-per-channel RA-04 sounds with them.

In the press release, Spendor claims this to be the most musical and revealing small speaker it has ever made: it's a bold claim, but one we wouldn't argue with.

The SA1s are superbly balanced speakers that cover their inevitable lack of bass extension with a combination of tautness, power and punch with what they do produce. That the top end is very smooth and well judged means the speaker's tonal presentation always appears even.

It's refined – but not too refined
Civility and even tonality is what we expect from Spendor; what's more surprising is the crispness of the timing and the solidity of attack when the source material demands. Grinderman's self-titled debut set is a rough and ragged affair that charges along full-throttle through these standmounts.

You are always aware of the speaker's innate refinement, but it doesn't tone down the album's (many) excesses or neuter the music's drive. Nick Cave's distinctive growl is as expressive and emotive as ever, due to this monitor's exceptionally transparent and communicative midrange performance.

No problems with different genres
Switch genre to Sibelius's Symphony No.1 and the SA1s respond with breathtaking imaging and a scale you'd scarcely credit from a speaker so small. Large-scale dynamics are delivered with confidence, and composure isn't shaken even when pushed to high levels. These baby boxes are a real surprise. Despite their size they turn in a terrific all-round performance.

Spendor's speakers have always been about an unforced, natural presentation that aims for long-term satisfaction. What these monitors add is greater insight and more surefooted timing into the company's small speaker recipe.

If you're short of space and want a pair of unfussy but supremely talented small speakers, the SA1s should be top of your audition list.