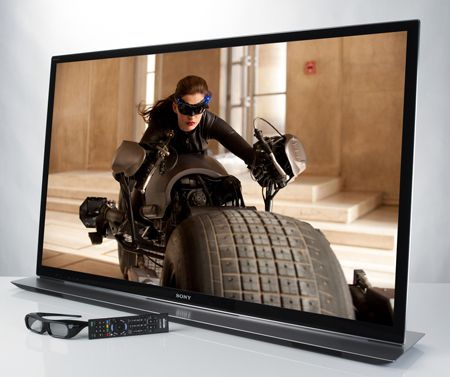 The Sony KDL-55HX853 is the first of the company's 2012 sets to arrive with us for review, and while the company’s not tremendously late to the party, it’s undoubtedly a bit tardy in getting its 2012 range of TVs into the shops and, just as importantly, into our testing rooms.

Mind you, Sony was a little bit stung by the less-than-effusive reception some of its 2011 selection of TVs received (both in this magazine/on this website and elsewhere) – so if the trade-off for this mild delay is more consistent products, then we’re more than happy to wait.

And even before the KDL-55HX853 is plugged into the mains, it’s one of the more attractive TV designs we’ve tested so far this year.

For the moment the HX850 series is the top of Sony’s range, and while the 55HX853 does without the control-interface whistles and bells of its Samsung or LG rivals (neither waving nor shouting will get you anywhere here) it’s got the looks and the specification to help it fight its corner in the showroom.

The bezel is slim, the plinth on which it stands (which incorporates stereo speakers) is included in the asking price, and the finish is impeccable.

As is standard with flatscreen TVs, there are more inputs (including four HDMIs and a couple of USB sockets) than any reasonable user will ever need.

TV reception is via a Freeview HD tuner, there’s plenty of Smart TV functionality, and a nice smartphone/tablet app goes a long way towards making up for the rather humdrum remote control.

Like most Sony products, the KDL-55HX853 has had obvious attention paid to its ergonomics, and consequently is a pleasure to use.

The remote, as we said, is mundane – but it’s perfectly logical and legible, while the control app is just as workable and a fair bit swisher.

On-screen menus are a very successful reworking of Sony’s veteran Media XrossBar template – there’s an absolute stack of adjustability at your fingertips, but nothing’s overly complicated or hard to find.

Set-up is a straightforward affair – even motion-processing, which some rival manufacturers make the subject of endless adjustment and tweaking, is dealt with via five different settings. We found the ‘clear’ position offered the most effective use of the Sony’s 200Hz technology.

Once satisfactorily set up, the KDL-55HX853 continues to make a good impression.

Standard-definition TV, predictably, looks a bit of a dog’s dinner – it’s in the nature of the broadcasts themselves. Noisy, uncertain with edges, coarse and short of detail, these are not images you’ll want to watch for long.

Only white tones, which are unarguably clean and crisp, give even the remotest cause for concern – they could be a little punchier. Despite this, though, the Sony’s contrasts are as convincing as every other aspect of its TV pictures.

After the excitement of the HX853’s television reception, its ability as an upscaler of DVD pictures is just fractionally underwhelming.

There’s no disputing the Sony’s remarkable ability to pull plasma-like levels of beautifully even, deep black shades from its LED-backlit LCD panel, and it manfully keeps all but the most testing motion under control, but it struggles to draw edges entirely smoothly and detail levels aren’t all they might be.

On balance, we’d leave our Blu-ray player to perform upscaling duties – most current mainstream players will do a better job.

That’s about it for complaints, though. Leave DVD behind in favour of some catch-up TV content (in this instance BBC Four’s superb Reggae Britannia) and the HX853 ups its game considerably.

Crisp, low-noise and stable in all circumstances, the Sony makes the very best of the source material to the point that there’s very little to differentiate between the broadcast itself and its streamed equivalent.

Even the wildly variable content on YouTube looks better composed than it really has any right too – and the Sony’s exemplary SEN (Sony Entertainment Network) menus are less cluttered, and therefore easier to use and to edit, than those of any number of rivals. The dedicated SEN button on the remote is a nice touch, too.

Switch to some native 1920 x 1080 content (in this instance the Coen brothers’ O Brother, Where Art Thou?) and the Sony gives an even more positive account of itself. Despite the film’s digital colour correction, which results in a sepia-tinged, slightly golden colour signature, the Sony delivers balanced and believable images, loaded with detail and with prodigious apparent depth of field.

Edges are smooth, textures are described explicitly and motion is managed with the sort of unshowy authority that’s the hallmark of a capable product. Colours are painstakingly judged throughout, with inky, informative blacks happily sharing scenes with bright(ish), clean white tones, and picture noise is remarkable only by its absence.

The Sony is a 3D TV of the active-shutter type, and consequently it uses powered 3D glasses that are, frankly, a little heavier and a little chunkier than we’d consider ideal. At least they’re the rechargeable-via-USB type, rather than using batteries, and there's a 'buy one get one free' offer on Sony's 3D glasses, which cost £60 a pair.

And with a 3D Blu-ray of Closer To The Edge being displayed, concerns about the weight or size of the glasses become more-or-less trifling. This is the most effective 3D Sony TV we’ve ever seen, serving up bright, lavishly detailed images that are stable and gratifyingly low on cross-talk.

The sort of motion a film about motorbike racing inevitably includes can cause a few alarms in extremis, but in general this is a really impressive 3D performer and about as strong an argument for the active-shutter methodology that we’ve watch so far.

And this is equally true of the Sony’s prowess with games. Hook up a Playstation 3, slide in a copy of Uncharted 3 and the KDL-55HX853 proves to be a fully gamer-friendly screen, one that keeps a decent grip of motion even as it keeps response times down to a bare minimum.

The 3D effect is just as enjoyable here as with movies, and the dreaded eyeball-fatigue we tend to associate with active-shutter 3D doesn’t manifest itself until you’ve been playing for a good while.

One area where the KDL-55HX853 scores comprehensively over every one of its nominal rivals is sound. The speakers housed in the plinth get much more breathing space than the drivers that rivals build into the chassis of their screens, and as a consequence the Sony sounds more open, more focused and altogether more substantial than any price-comparable competitor.

With the afore-mentioned Reggae Britannia on the screen, we were even treated to some low-frequency information – a bassline delivered by a TV is normally only discernible by its absence, but the HX853 grants low-end information speed and substance.

So taken as a complete package, there’s very little fault to be found with the KDL-55HX853. Its delivery of white tones could be punchier, sure, and it’s not the most accomplished upscaler of DVDs we’ve ever seen, but these minuses are far outweighed by everything the Sony does well – we’re particularly taken with its outstanding black-tone facility, its motion-handling, its looks and its sound.

And where Sony’s 2011 TVs’ albatross around the neck is concerned? Well, we're happy to report that the backlighting on our KDL-55HX853 is absolutely impeccable.

This TV is a class act, and when the first TV Supertest of the season is undertaken it’s going to be a strong contender.