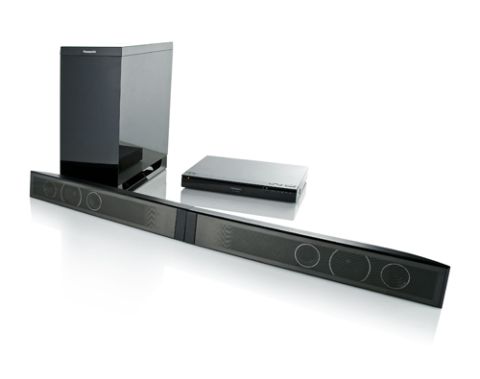 Some great ideas from Panasonic, but there are more engaging soundbars

The stylish Panasonic SC-HTB550 comes in three parts: a stylish soundbar, of course, an amplifier and a wireless subwoofer.

Overall, it’s a nicely flexible system: the main speaker unit can function either as a single bar, or pulled apart to be used as two separate speakers for a traditional 2.1 set-up.

Along with the digital optical inputs, you can hook up, say, your Blu-ray player into one of two HDMI inputs, or stream media stored on your portable device via the in-built Bluetooth.

You can also control the volume through your smart device or the tiny remote control.

Panasonic SC-HTB550 review: Sound quality
Put on the Blu-ray of Quentin Tarantino’s Inglourious Basterds and you’ll be rewarded with crisp detail, with a touch of sparkle to the treble. The film’s Spaghetti Western-esque soundtrack gives the SC-HTB550 plenty to do, with plenty of detail and rhythm to keep it busy.

The Panasonic comes with a remote that can adjust the dialogue and subwoofer levels. It’s a useful function, as we did find ourselves increasing the dialogue level when watching the DVD of the tough tester Paranormal Activity to make it clearer.

That bright treble can give a dash of excitement and intensity to effects, such as the gunshots in Inglourious Basterds. However, the emphasis isn’t helped by a less-than-impressive subwoofer, which falls short in the muscle and agility stakes.

Switch to Armageddon on Blu-ray and there isn’t much impact or drama to accompany all those crashes and bangs. The overall sound is rather small, and not as open and spacious as some rivals.

Panasonic SC-HTB550 review: Verdict
So it’s a mixed bag for the Panasonic: the multi-positional speakers are a bonus, and nearly anything is better than the wispy sound from your TV, but there are better-performing soundbars that are far more engaging.