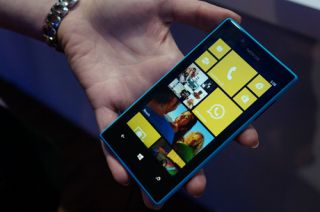 The Nokia Lumia 520 is set to be the company's lowest-priced Windows 8 smartphone, offering entry-level consumers a Windows 8 experience for under £200.

However, our attentions were drawn towards its bigger sibling, the mid-range Nokia Lumia 720.

With one glance, the Nokia 720 is quite obviously a part of the Lumia range, borrowing its unique design queues from its siblings.

The 720 is a polycarbonate unibody design like the 920, dropping the interchangeable covers of the 820. It does, however, come in a choice of five colours - white, black , yellow, red and blue.

It feels good in the hand - solid, but lightweight, and quite like an original Lumia 800.

As you'd expect, it takes a hit in the spec department from its pricier siblings - it has a 1Ghz dual-core processor instead of the 1.5GHz version in the 820, and it also drops down from 1080p HD video recording to 720p.

On-board storage is a fairly low 8GB, though it is expandable via microSD, and RAM is 512MB.

However, it is significantly lighter at 128g (vs 160g for the Lumia 820), despite having a bigger 2000mAh battery and is actually thinner by 1mm. Every mm counts.

It's nothing to shout about, but it does the job for its level, and can also be used with gloves, as per the 920.

It's also a really nice size. In a mobile world where screens seem to be heading more towards the 5-inch mark than the 4, it's refreshing to have someone not following the crowd. Below is a photo of it next to the 920.

As you might expect, there's not 4G on board, but there is NFC for pairing the 720 easily and quickly to compatible speakers and the like.

Nokia is really pushing the camera capability of the Nokia 720 and the 6.7MP camera with an impressive f1.9 aperture does a surprisingly good job.

We tested it out both with and without flash and found it captured colours realistically and handled low light snaps well, though blacks had a tendency to be a bit wishy washy.

It's by no means a camera that'll top the great camera in the Nokia 920, but it's a nice surprise to see from a phone at its price point - thought to be around £200 SIM free.

Performance was nippy enough considering the dip in processor power compared to the numerous high-end phones we've been fondling at MWC 2013.

That said, we can imagine that large apps or a vast amount of multitasking may trip it up. We'll have to wait until we get the 720 in for a full review to know for sure.

First impressions of the Nokia Lumia 720 are certainly promising for a mid-range phone, even if it's sometimes hard to get as excited by a mid-range handset as we do about one with all the bells and whistles.

If you're someone interested in getting a Windows 8 smartphone without the high-end price tag, the Nokia 720 offers enough to be a very interesting prospect indeed.