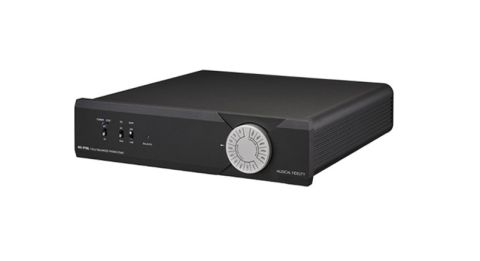 Musical Fidelity’s MX-VYNL is as detailed, refined and articulate a phono stage as we’ve heard at this price

Phono stages are an easily overlooked link in the analogue hi-fi chain. They are usually either a hidden module inside an integrated or pre-amplifier, or a small, plain box tucked away on the hi-fi rack.

But after the record player, we think this is arguably the next most critical component in the signal path. Anyone who doubts that should listen to Musical Fidelity’s new MX-VYNL against some of its rivals in a suitably talented system.

Suitably talented? This is not the kind of product that makes any sense if your turntable isn’t spot-on. You simply won’t hear just how good this unit is without a suitably detailed and transparent source.

We think the likes of VPI’s Prime record player (£4200) is a good starting point, but would be happy to keep on using the MX-VYNL with decks up to double that price. This little box really is that good.

Take it out of the packaging and you’ll find the MX-VYNL is beautifully made. It feels solid and features a smartly machined front panel with positive-feeling controls.

As befits a product at this level, there is provision to alter cartridge loading to optimise performance. Rather than use a series of dipswitches, as many rivals do, Musical Fidelity has a rather elegant control dial to manage the switch between moving coil and moving magnet inputs and their different loading requirements.

There are five different capacitance settings for moving magnet and no less than nine impedance values for moving coil.

There’s also added flexibility in the form of a gain switch that increases sensitivity for lower output cartridges (of either type), should you need it. You can also swap between RIAA and IEC equalisation curves from the front panel.

Short of having remote switching – as the pricier Cyrus Phono Signature has – this is about as convenient a phono stage as we have come across.

Take a look inside and you’ll find that this is a fully-balanced electronic design. On paper this promises low noise levels and improved dynamics.

Alongside a standard single-ended phono input – something that will be used by the vast majority of decks around – the MX-VYNL can also accept a balanced signal in the form of a mini XLR 5-pin connector. There’s a small sliding switch under the connections to flick between the two.

You’ll also find both single-ended and balanced output options. Having had a play with both, we settle on the balanced XLR output, as it sounds bolder and more precise than the already capable single-ended alternative.

The MX-VYNL takes up the same amount of shelf space as an A5 sheet of paper and has a wall-wart power supply.

It’s always good practice to keep the sensitive circuitry of the phono stage, its mains lead and the cables from the record player away from any conductors or components carrying high currents. This avoids hum and other distortions spoiling the sound.

It doesn’t more than a few seconds of Into My Arms by Nick Cave And The Bad Seeds to recognise that this phono stage is a terrific performer.

We love the way it handles vocals, delivering Cave’s distinctive voice with all the solidity, presence and emotion it deserves. There’s an appealing fluidity to the MX’s sound that makes most of the competition sound a little mechanical in comparison.

While not necessarily matching the rhythmic cohesion of a rival like Rega’s similarly-priced Aria, this Musical Fidelity still manages to convey the gentle rhythmic momentum of this track well, and pulls ahead in outright transparency and detail resolution.

We love the solidity of the piano notes and the way this phono amp captures the leading edges and the trailing decay so well.

We try Beethoven’s Ninth Symphony and are pleased with the MX-VYNL’s ability to float an expansive and precise soundstage.

The scale of the sound is impressive as is the way the Musical Fidelity responds to large dynamic shifts. There’s plenty of control and composure here and it’s not bought at the expense of excitement or enthusiasm.

Tonally there’s suggestion of richness in the bass and a general sweetening of the presentation, but none of it is taken to excess and mostly it just makes the phono stage forgiving of harsh or aggressive recordings.

Worried that the MX-VYNL might try to sanitise recordings too much, we put on Nirvana’s Nevermind and breathe a sigh of relief.

Sure, the sound is a little more rounded than the Rega Aria might deliver, but there’s still plenty in the way of bite and attack. We revel in the Musical Fidelity’s articulate nature and its ability to combine attitude with refinement. It’s a superb balancing act.

It’s been a while since we’ve heard a Musical Fidelity product as capable as this one. The MX-VYNL is superbly made, nice to use and sounds lovely. Provided the rest of your system is up to scratch, this is one you can buy with confidence.