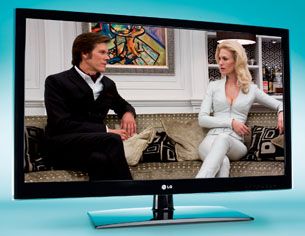 A somber-looking set matched by a rather average picture performance

Such was LG’s keenness to get its 2011 screens over for review that they offered us two models for our June 2011 Supertest.

First up we've the 40LV550T: it looks more bland than beautiful, although it’s solidly built and feels sturdy when parked on its swivel stand.

There’s a small gathering of touch-sensitive buttons on the bezel to help jazz things up. Compared to LG's 42LW550T there’s no 3D functionality, nor is there local dimming for the LED backlight.

But still, there’s more than enough in the way of features to keep potential suitors entertained.

Icons on this screen are colourful and bright, and the general feeling is of a neatly assembled portal leading to all things multimedia.

From here you can go to the TV’s setup menus, connect to the LG’s own web browser or jump straight into the world of catch-up TV from iPlayer, video-on-demand from Acetrax, or investigate and download your pick of apps from LG’s very own app store.

The quality of streamed video is adequate for short bursts, though there’s some shimmering evident when it’s tested with fast on-screen movement.

BBC iPlayer prone to freezing
To make matters worse the iPlayer app had a worrying tendency to freeze mid-stream, while rivals had no such problems. The result? We never made it to the end of EastEnders – a blessing or a curse depending on your point of view.

A spin of Little Fockers on DVD shows that the LG’s internal scaler can’t draw edges quite as sharply as rival sets.

This vagueness isn’t helped by the presence of digital artifacts: use the Blu-ray of Harry Potter And The Deathly Hallows, and there’s an improvement, (as you’d expect) but there’s still picture noise to contend with.

Contrast levels aren’t the best and, instead of concentrated blacks in dark scenes, the LG appears diluted.

Freeview HD performs well
Initial impressions of the Freeview HD tuner are pretty favourable. Champions League football is a stern test for any flatscreen and the LG handles close-up motion tracking and the detail on the players’ kits relatively well.

There’s a little flicker along the edges of shirt-sleeves, especially during wide shots where there’s a lot of movement at once.

Colours are reasonably judged – grass is a fine shade of green – but blues and whites are slightly overdone, as is the fluorescent shirt of the referee. Even after much tweaking of the menus, It’s difficult to reach a perfect balance.

Frustrating Blu-ray volume
The speakers sound a little hollow, and lack bass, though as you’ll discover, sonic standards in this test aren’t high. But we were flummoxed as to why we had to crank up the volume after switching from terrestrial TV to Blu-ray.

For the money, the LG puts up a decent showing, but it’s going to have its work cut out to beat it rivals