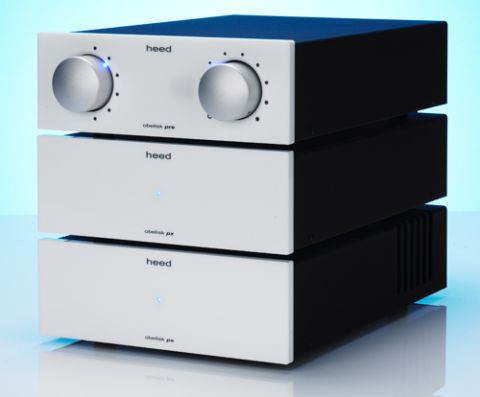 This is a superb sounding preamp, but Heed needs to make it feel more luxurious

Until last year we knew Hungarian manufacturer Heed Audio as the company that makes some rather fine budget phono stages. Indeed the company’s Questar MM was a multiple Award winner a few years ago.

The arrival of the Heed Obelisk si last year changed that impression. This unassuming 35 watt per channel integrated amplifier took on the establishment and, rather shockingly, won, in terms of performance at least. We were impressed enough to award it a Best Buy at its price point.

This Heed Obelisk pre/ps pre/power combination is the natural step up from that terrific little integrated. The asking price almost triples once the preamp’s px outboard power supply is added to the equation, but there’s a lot more on offer here too.

If you think these look like something of a throwback to the past, you’d be right.

At heart, the electronic design of these components owes much to the amplification a small British company called Ion Systems made back in the 1980s. Heed took over the designs when Ion went out of business in the 1990s.

In a rather satisfying ‘circle of life way’ it’s pleasing to know these newest components were redeveloped with the help of the original designer Richard Hay and updated for today’s market. The basic ideas behind the circuit design have remained unchanged but there have been plenty of revisions, particularly when it comes to component quality.

The preamplifier is a far more flexible device than its appealingly simple exterior suggests. It has plenty of line level inputs and has space on its circuit boards for optional add-on modules.

At the moment these consist of a moving magnet phono stage (£145) and digital-to-analogue conversion module (£265). Our review sample came in basic form and wasn’t fitted with either of these, but experience with the DAC module in the Obelisk si integrated amplifier and suggests that it’s likely to be a good rather than great performer.

The preamplifier comes with remote control, but it’s of the flimsy credit-card type that we normally find supplied with budget iPod docks. We think such a handset should have no place in a product of this price level. It’s the main point of contact the user has with the product and so should be given more priority.

The preamplifier can be used as a stand-alone unit, or with an optional outboard power supply called the px, which costs an extra £880. We’ve chosen to go with the extra unit simply because the preamplifier sounds so much better when used this way.

It looks like rather a lot of money when we take a look inside despite the obvious quality of some of the components used (see below).

However, as with most of the better outboard power supplies we test, the sonic benefits are obvious. Without the px the preamplifier sounds tidy and precise. It’s still a musical performer and has an appealing surefooted way with rhythms and dynamic variations.

Attach the power supply – just remove the shorting plug at the back of the preamp and replace with the supply’s lead – and everything gets better. The pre’s sound becomes larger and more expressive. There’s greater detail on offer and an improved handling of dynamic contrasts, both small and large. That said, the pre’s tonal balance remains unchanged.

Take a look inside the Obelisk pre (below) and it’s easy to see the care taken over the circuit layouts, and the obvious quality of some of the components used. On the whole this preamp feels solid and able to withstand the rigours of regular use well.

However, we think the finish could be slicker. The rounded-off corners of the front panel aren’t as smooth as we’d like and neither does this amp give off the aura of luxury that most similarly priced amplifiers manage with ease.

In the Obelisk si integrated amplifier we didn’t mind this so much, but judged by sterner standards demanded at higher price points these Heed products seem a little ordinary.

Start listening and any misgivings about the finer points of finish (where's that aura of luxury?) are pushed to the back of our minds. Everything we liked in the integrated’s sound is here, only better.

The great thing about this preamp when combined with the Heed Obelisk ps power amp and px power supply is that it concentrates the listener’s mind squarely on the music, delivering it with real enthusiasm.

This is because it gets the basics of hi-fi replay pretty much spot on. The tonal balance may not be wholly neutral. The bass is a touch on the rich side and the midrange is a little prominent, but the deviations aren’t massive enough to leave the amplifier sounding unbalanced. What they are is carefully balanced to deliver an appealingly full-bodied sound that delivers an awful lot of detail but never sounds overtly analytical.

Vocals are impressively handled, sounding simply beautiful with great recordings such as The Unthanks’ Last. The group’s voices are reproduced with a lovely combination of solidity and subtlety.

So capable are these Heeds with this lush production that it’s very hard pull away from the songs and concentrate on the sonic aspects of the presentation instead.

The background instrumentation dovetails beautifully into the presentation and is delivered with just the right combination of finesse, and even power when required.

Move onto something larger scale such as The Dark Knight Rises OST and it becomes clear that the power amp isn’t a powerhouse. There isn’t quite the sonic authority, bass tautness or image scale of some rivals.

However, there are plenty of positives here too. This combo delivers rhythms in a resolutely surefooted manner conveying the momentum in the music in a class-leading manner. There’s a pleasing sense of composure too, with this trio keeping a firm hold of things as the music gets more complicated.

More than the detail and timing it’s the way these Heeds deliver music, any music, with real enthusiasm that impresses. That’s not to say they add hype, rather they get straight to the point and make it very clear as to the emotions the artist wants you to feel. Rarely do we come across products that communicate this well.

The Heed isn't flawless – we’d like more attention paid to the quality of the finish – and there are rivals that sound more authoritative. It’s these things that lose it that fifth star.

However, the fact remains that this pre/power combination is great fun to listen to. It’s involving and exciting in a way few rivals can match, and that why this trio deserves a high place on any shortlist.