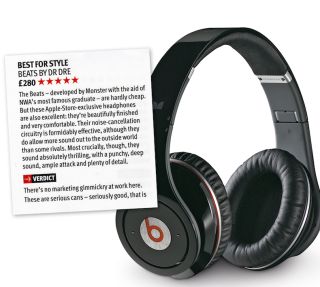 It’s coming up to seven years since we first reviewed a pair of Beats headphones. They were called Beats By Dre back then and, despite a five-star rating, we would never have guessed at the seismic impact they would have on the headphone industry.

The combination of excellent marketing, Dre’s image and good product set the premium headphone market on fire. Before Beats, the idea of spending almost £300 would have been unheard of for the mass market. Now it’s nothing unusual.

Beats also changed the way headphones sound. Their bass-heavy balance has become the norm in every category below the true high-end. But they did many other things as well.

That first model was superbly made and had a premium feel most rivals lacked. They were comfortable too. Add that to a sound that, while it overplayed low frequencies, was still detailed enough to satisfy the purists, and you have a firm foundation for success. How much success? When a company like Apple pays $3 billion to buy out Beats, it’s fair to say a lot.

Read all our Beats by Dr. Dre reviews

Unsurprisingly, the brand-new Beats Solo 2s, don’t mess with the original’s recipe too much. They remain nicely finished, comfortable and impressive when it comes to bass power and out-and-out attack. The brand’s rivals haven’t stood still though, matching the Solo 2’s quality feel and sonic excitement while delivering superior insight.

It will be interesting to see how the Beats brand develops from here. Headphones will remain core, but we know it is set to branch out to other products such as streaming services. And we can’t wait to see how it fares.