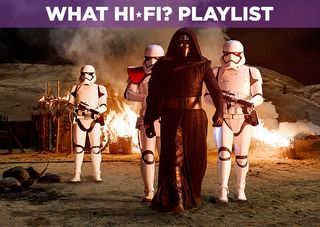 Fact one: the original Star Wars trilogy has an immense fan base tantamount to a religion. Fact two: their collective contempt for the misjudged prequels couldn’t be fiercer if you rounded up their mothers and blasted them out of an airlock.

There is a lot riding on The Force Awakens, and it’s not just the $4.05 billion Disney paid to buy Lucasarts. It is the promise of redemption. Star Wars Episode VII offers a genuine new hope for the series, and its intentions are clear from the first line of dialogue: "this will begin to make things right."

It does indeed begin to make things right. The Force Awakens is the first proper Star Wars film we’ve had since 1983. Coming back to this universe is a joyful and comfortable occasion, like seeing an old friend or getting hugged by a Wookiee.

That means it is a magical adventure and it makes no apologies for having fun. It is an exhilarating battle of good and evil, not weighed down by nonsense about trade tax and senate politics.

Tacky CGI no longer fills every frame. We are back to the good old days of mostly practical effects, which makes everything instantly more lived-in and believable. Harrison Ford broke his leg during production. How? They had built a full-size Millennium Falcon, and the door fell on him. The stakes are real.

Speaking of Harrison Ford: his return as the legendary Han Solo is easily his best performance in years. He steals the show, even in a supporting capacity. It’s clear he actually cares, certainly a lot more than he did with Indiana Jones and the Kingdom of the Crystal Skull. He delivers his lines with absolute conviction, only now the trademark sarcasm is tempered with a grizzled weariness.

The lightsaber is passed to a new generation, along with the task of saving the galaxy far, far away. There is hotshot pilot Poe (Oscar Isaac), desert scavenger Rey (Daisy Ridley) and Finn (John Boyega). The best of the new lot is actually BB-8, an instantly lovable droid with a distinct personality that stops it from being an imitation of the iconic R2-D2.

These are all strong, well-developed characters that are easy to care for and their chemistry with the Class of ‘83 is unmistakable. It is clear they are here to take over the beloved franchise, but the transition feels entirely organic. Their adventure is everything that the prequel trilogy is not: fun, and sometimes very funny.

Familiarity is a blessing and a hindrance for The Force Awakens. It effortlessly sells this film as part of the family, but it also restricts the experience. By trying so hard to please the long-time fans, it gets tied down by nostalgia.

It follows almost the same beats as A New Hope. The First Order is a slicker version of the Empire, while the Resistance is the Rebel Alliance in all but name.

Director JJ Abrams’ priority is to make everyone feel at ease, rather than to rock the boat. It’s not necessarily a bad thing – and you could argue that history repeats itself – but those looking for a revolution will have to wait.

Thankfully, there are enough new elements to keep things fresh. Where the camera never used to move, the cinematography takes a much more active role, with a highlight being a spectacular single-take shot during an X-Wing raid. The action is a more involved, visceral experience.

The new characters are not facsimiles of the originals but the villain really differentiates himself, even if the clothes are a little familiar. Emperor Palpatine had his hooded cackling and Darth Vader was calmly threatening – but Kylo Ren is unstable and very angry, making for a credible and unpredictable menace.

Then there’s the score, a magnificently brassy return from John Williams. He recycles some of the old themes to spine-tingling effect but there’s some great new material too. Rey’s theme is a particular earworm.

This is one of the most technically impressive films we’ve seen in years, so choose your cinema wisely. We’d recommend catching this in 2D. The 3D presentation is actually one of the better ones we’ve seen, but that doesn’t take away the usual problems: it’s dark and doesn’t add much. Catch it in 2D and you make the most of the lovely colours.

As for sound, you need to hear this in Dolby Atmos. This is the sort of film object-based audio was made for, and it is a real treat hearing TIE Fighters and X-Wings zoom past overhead. If nothing else, it helps to make sense of Kylo Ren’s dialogue, which sounds occasionally muffled behind that mask.

This is it. This is the film Star Wars fans have been expecting for 32 years. Is it perfect? No, but the problems are easily forgiven – we could do with more innovation, and some more down time between action would make for more even pacing.

Considering all hype and hope, The Force Awakens is as good as it could be: right up there with the original trilogy. There is now a fourth Star Wars film, and the Force is strong with this one.